Kids Encyclopedia Facts
Not to be confused with DIA Memorial Wall. 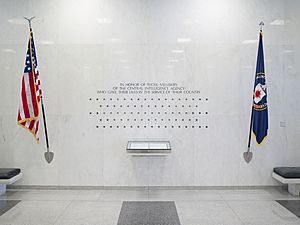 The Memorial Wall is a memorial at the Central Intelligence Agency headquarters in Langley, Virginia. It honors CIA employees who died in the line of service.

The Memorial Wall is located in the Original Headquarters Building lobby on the north wall. There are 133 stars carved into the white Alabama marble wall, each one representing an employee who died in the line of service. Paramilitary officers of the CIA's Special Activities Division compose the majority of those memorialized.

The wall bears the inscription "In honor of those members of the Central Intelligence Agency who gave their lives in the service of their country." The wall is flanked by the flag of the United States on the left and a flag bearing the CIA seal on the right. 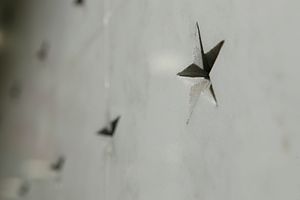 One of the engraved stars

When new names are added to the Book of Honor, stone carver Tim Johnston of the Carving and Restoration Team in Manassas, Virginia adds a new star to the wall if that person's star is not already present. Johnston learned the process of creating the stars from the original sculptor of the wall, Harold Vogel, who created the first 31 stars and the Memorial Wall inscription when the wall was created in July 1974. Although the wall was "first conceived as a small plaque to recognize those from the CIA who died in Southeast Asia, the idea quickly grew to a memorial for Agency employees who died in the line of duty." The process used by Johnston to add a new star is as follows:

Johnston creates a star by first tracing the new star on the wall using a template. Each star measures 2¼ inches tall by 2¼ inches wide and half an inch deep; all the stars are six inches apart from each other, as are all the rows. Johnston uses both a pneumatic air hammer and a chisel to carve out the traced pattern. After he finishes carving the star, he cleans the dust and sprays the star black, which as the star ages, fades to gray.

The Honor and Merit Awards Board (HMAB) recommends approval of candidates to be listed on the wall to the Director of the Central Intelligence Agency. The CIA states that

[i]nclusion on the Memorial Wall is awarded posthumously to employees who lose their lives while serving their country in the field of intelligence. Death may occur in the foreign field or in the United States. Death must be of an inspirational or heroic character while in the performance of duty; or as the result of an act of terrorism while in the performance of duty; or as an act of premeditated violence targeted against an employee, motivated solely by that employee's Agency affiliation; or in the performance of duty while serving in areas of hostilities or other exceptionally hazardous conditions where the death is a direct result of such hostilities or hazards. After approval by the director, the Office of Protocol arranges for a new star to be placed on the Wall.

On May 6, 1954, during the Battle of Dien Bien Phu, two CIA pilots, James B. McGovern, Jr. and Wallace Buford, were killed when their C-119 Flying Boxcar cargo plane was shot down while on a resupply mission for the French military. They worked for Civil Air Transport, which was later reorganized as Air America. Neither of them has a star on the Memorial Wall.

There were more than 30 pilots and other crew members of the CIA's Air America company who were killed during the Vietnam War that were not counted as part of the Agency even though they worked for it. The names of some of them were: John M. Bannerman, Eugene DeBruin, Joseph C. Cheney, Charles Herrick, John Lerdo Oyer, Jack J. Wells, George L. Ritter, Edward J. Weissenback, and Roy F. Townley.

All content from Kiddle encyclopedia articles (including the article images and facts) can be freely used under Attribution-ShareAlike license, unless stated otherwise. Cite this article:
CIA Memorial Wall Facts for Kids. Kiddle Encyclopedia.