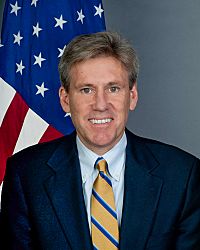 The 2012 Benghazi attack took place on the evening of September 11, 2012. Islamic militants attacked the United States consulate in Benghazi, Libya. Killed in the attack were US Ambassador Christopher Stevens and Sean Smith a US diplomat. Stevens was the first U.S. Ambassador killed in the line of duty since 1979. Two other US diplomats were killed in the attack. At first the attack was thought to be an angry mob. But later it was learned it was a planned terrorist attack.

Late in the evening of September 11, 2012, about 150 gunmen with beards blocked off the streets leading to the US Consulate buildings. The roadblocks were set up using pickup trucks with the logo of Ansar al-Sharia. The assault began about an hour later. There were seven Americans in the building at the time. Five were armed security officers. 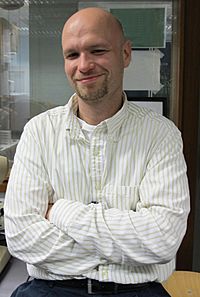 US diplomat Sean Smith, killed in Libya along with the US Ambassador

In February 2011, a civil war broke out in Libya. A rebellion started against Muammar al-Gaddafi and his government. A few weeks later U.S. envoy Chris Stevens came to Benghazi, Libya's second largest city, by cargo ship. He arrived on April 5. In August Gadhafi was driven out of the capital, Tripoli. On 20 October 2011 Gadhafi was killed. Chris Stevens was named as Ambassador to Libya in May 2012. He was to be based in Tripoli. Security people working for the U.S. government warned they needed more security but were turned down.

On September 9th Stevens met with Islamic militia leaders in Benghazi. They warned there had been threats against Americans by extremists in Benghazi. They also told the ambassador he and his group should leave as "soon as possible". But they also said they wanted American investments in Libya. They asked how soon Benghazi could get a McDonald's and a KFC.

Day of the attack

On September 11th, several hours before the attack started, Stevens sent a message to the State Department warning the situation was getting worse. Later, Secretary of State Hillary Clinton said she was not aware of what was happening at the time. The reason she gave is the State Department receives more than a million messages a year. After the attack started, a rescue team (called the commander’s In-extremis Force) started getting ready. But the ambassador was dead before the team was ready to leave Italy. After the attack 30 or more Americans were evacuated from Benghazi. 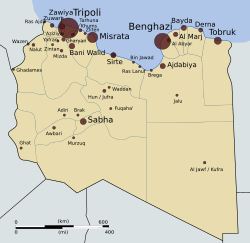 There were five U.S. commandos stationed at the CIA base in Benghazi about a mile from the consulate. They heard the attack starting and got ready to go rescue the ambassador. But they said later, the CIA station chief stopped them from going and told them to stay with the CIA. They also received a radio message from the consulate “If you guys do not get here, we are going to die!” The CIA later stated they were trying to get local Libyan militia to go help the consulate. But they also said they did not prevent the commandos from rescuing the consulate members.

American troops and law enforcement captured Ahmed Abu Khattala on June 15, 2014. He is the suspected ringleader of the group who carried out the attack. Other suspects also had sealed charges filed against them.

On May 8, 2014, the United States House Select Committee on Benghazi was formed to investigate the 2012 Benghazi attack. The chairman of the committee is Representative Trey Gowdy from South Carolina.

All content from Kiddle encyclopedia articles (including the article images and facts) can be freely used under Attribution-ShareAlike license, unless stated otherwise. Cite this article:
2012 Benghazi attack Facts for Kids. Kiddle Encyclopedia.