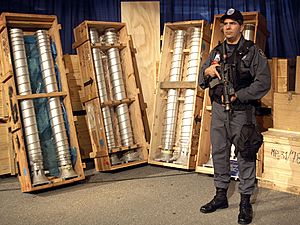 In 2003, Libya admitted that the nuclear weapons-related material including these centrifuges, known as Pak-1, were acquired from Pakistan

Dual use technology means to the possibility of military use of civilian nuclear technology for generating electricity. Many technologies and materials associated with the creation of a nuclear electricity program have a dual-use capability. These items can be used to make nuclear weapons if a country chooses to do so. When this happens a nuclear electricity program can lead to making atomic bombs. The crisis over Iran’s nuclear activities is an example.

All content from Kiddle encyclopedia articles (including the article images and facts) can be freely used under Attribution-ShareAlike license, unless stated otherwise. Cite this article:
Nuclear proliferation Facts for Kids. Kiddle Encyclopedia.