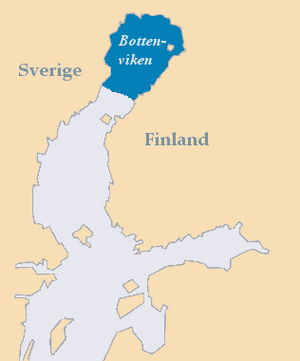 Bothnian Bay (Swedish: Bottenviken; Finnish: Perämeri) is a bay in the northest of the Gulf of Bothnia.

The largest island is Hailuoto, which is part of Finland. It is the only permanently populated island in the bay.

All content from Kiddle encyclopedia articles (including the article images and facts) can be freely used under Attribution-ShareAlike license, unless stated otherwise. Cite this article:
Bothnian Bay Facts for Kids. Kiddle Encyclopedia.