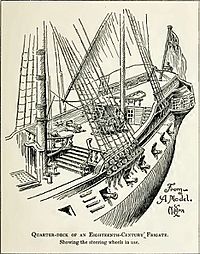 Illustration of the Quarter deck of an 18th century frigate

Decks are the main horizontal parts of a ship's structure. The crew stand and walk on the deck. A deck is the floor of a boat or ship , but open boats only have floorboards.

Below is a list of the many names given to different decks. They might be confusing. The list should be used with caution because there is no one agreed system for naming decks.

All content from Kiddle encyclopedia articles (including the article images and facts) can be freely used under Attribution-ShareAlike license, unless stated otherwise. Cite this article:
Deck (ship) Facts for Kids. Kiddle Encyclopedia.