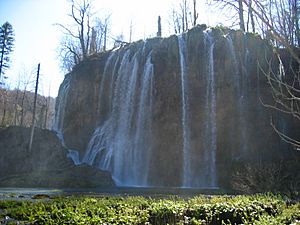 The waterfall Galovački buk at the Upper Lakes 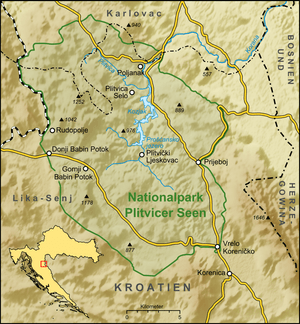 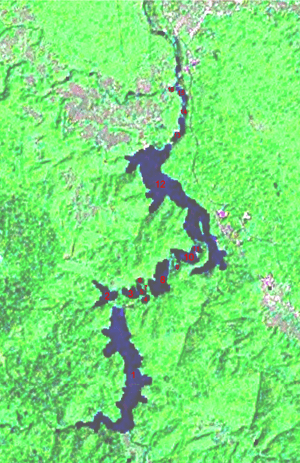 View of the lakes on a satellite image 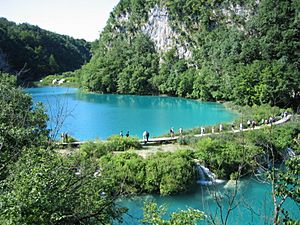 Paths between the lakes

Plitvice Lakes is a World Heritage Site and National Park in Croatia. Waters flowing over the limestone and chalk have deposited minerals, and created natural dams. The result is a series of beautiful lakes, caves and waterfalls. The forests in the park are home to bears, wolves and many rare birds.

In 1979, Plitvice Lakes was one of the first natural sites added to the UNESCO World Heritage register. Each year, more than 900,000 visitors are recorded.

The lakes are renowned for their distinctive colours, ranging from azure to green, grey or blue. The colours change constantly depending on the quantity of minerals or organisms in the water and the angle of sunlight. 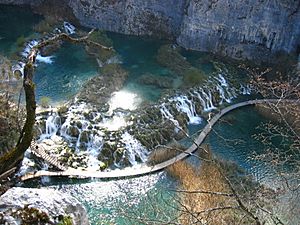 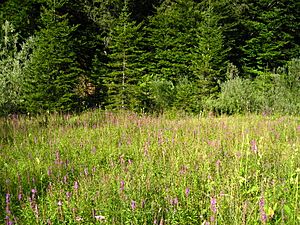 With regard to plant and animal diversity, the area of the Plitvice Lakes is one of the most significant areas of Croatia, due to climatic conditions and its relatively remote location, since the lakes are at a fair distance from polluted and noisy cities and industrial plants. As a result of the low level of industrial development in this region and the early introduction of protective measures, a nearly untouched landscape has been preserved. In the partially primeval beech and fir forests various rare species, such as the brown bear have survived. 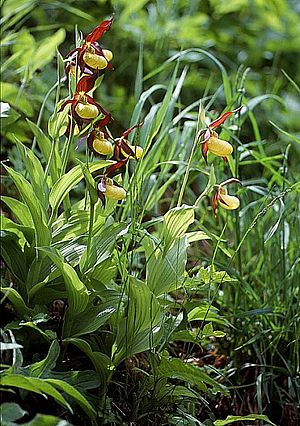 The Plitvice Lakes national park is heavily forested, mainly with beech, spruce, and fir trees, and features a mixture of Alpine and Mediterranean vegetation. It has a notably wide variety of plant communities, due to its range of microclimates, differing soils and varying levels of altitude.

Scientists have so far identified 1,267 different types of plants belonging to the 109 species so far recorded in the area of the national park. 75 species of plants are endemic, which means that they were first defined and classified in this area of the world or nearby. A great number of these plants and species are protected by law. Within the national park area 55 different species of orchids can be found.

The great plant diversity creates a fascinating interplay of colours that change with the seasons. The lake area is surrounded by dense forests. The national park has an area of 29,842 hectares, of which some 22,308 hectares are forests (74.75 percent), 6,957 ha are meadows (23.31 percent) in village areas and 217 ha (0.72 percent) are water areas. A unique area is the forest of Čorkova uvala, a 79.50 ha large virgin forest in the northwestern part of the park. The beech and fir trees in this area of the park are up to 700 years old. 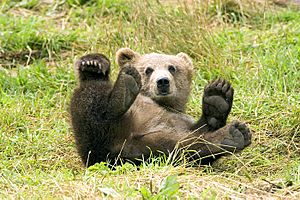 The area of the national park is home to an extremely wide variety of animal and bird species. Rare fauna such as the European brown bear, grey wolf, eagle, owl, Eurasian lynx, European wildcat, and capercaillie can be found there, along with many more common species.

The wider area of the national park is one of the last areas in Europe in which a great number of wild brown bears and wolves can be found. The rich fauna of the Plitvice Lakes includes some 50 species of mammals. Scientists have so far discovered 321 different kinds of butterflies, of which 76 are day-flying butterflies, and 245 are nocturnal moths. Scientists, however, estimate that up until now only about 40 percent of the whole population of butterflies has been identified. Furthermore, 12 amphibian species, as well as some species of reptiles have been recorded, including the viviparous lizard (Lacerta vivipara), the european green lizard (Lacerta viridis), the dice snake (Natrix tessellata), Vipera berus, Vipera ammodytes and the european pond turtle (Emys orbicularis).

Due to the spreading growth of vegetation at the barriers, allochthonous (species that originate elsewhere and do not belong to this ecosystem) fish species spread quickly and thus endanger autochthonous trout species. Apart from the trout, common minnows (Phoxinus phoxinus) are also found. As a result of human interference the species salvelinus alpinus and the North American rainbow trout have been introduced to this ecosystem. Recently, even European chub (Squalius cephalus) and common rudd (Scardinius erythropthalmus), species whose emergence may be attributed to climate change, have been discovered. The number of crayfish, which were almost extinct, is now again increasing. Even rare olms (Proteus anguinus) can be found in the karst caves of this region.

All content from Kiddle encyclopedia articles (including the article images and facts) can be freely used under Attribution-ShareAlike license, unless stated otherwise. Cite this article:
Plitvice Lakes National Park Facts for Kids. Kiddle Encyclopedia.