Lika-Senj County ( Croatian: Ličko-senjska županija) is a county of Croatia. It includes most of the Lika region and some coastline on the Adriatic. It also includes the northern part of the Pag island. The seat of the county is Gospić.

The county is the least populated (with 50,927 inhabitants in 2011) and one of the poorest. It is the largest Croatian county by area. It includes the Plitvice Lakes National Park and Sjeverni Velebit National Park. These are some of Croatia's major tourist attractions. The county has a total area of 5353 km2.

Lika-Senj County is divided into 12 towns and municipalities: 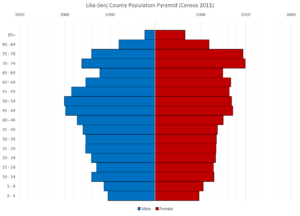 Since the early 20th century, the county's population has been shrinking. As of the 2011 census, the county had 50,927 residents. The population density is 9.5/km2.

In 1991, before the Croatian War of Independence started, Croats were 59.7% of the population and Serbs were 37%. The eastern part of the county was a majority Serbian area.

All content from Kiddle encyclopedia articles (including the article images and facts) can be freely used under Attribution-ShareAlike license, unless stated otherwise. Cite this article:
Lika-Senj County Facts for Kids. Kiddle Encyclopedia.