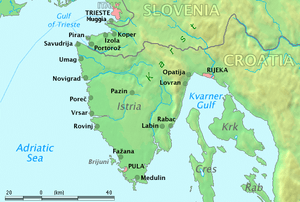 Istria (Croatian and Slovenian: Istra, Venetian and Italian: Istria), formerly Histria (Latin), is the largest peninsula in the Adriatic Sea. The peninsula is located at the head of the Adriatic between the Gulf of Trieste and the Bay of Kvarner.

All content from Kiddle encyclopedia articles (including the article images and facts) can be freely used under Attribution-ShareAlike license, unless stated otherwise. Cite this article:
Istria Facts for Kids. Kiddle Encyclopedia.