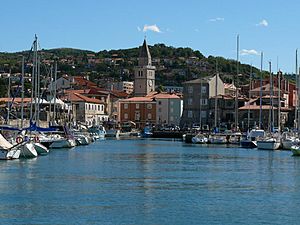 Muggia, the only Italian city of contemporary Istria

Istrian Italians are one of the ethnic groups of Istria. The others are Croatians, Slovenians and Istrorumanians.

The Istrian Italians enjoyed a huge cultural development in the centuries under Venice: Pola and Capodistria were important centers of art and culture during the Italian Renaissance. Personalities like Pier Paolo Vergerio (a famous "Humanist") and Santorius Santorio (a physician who discovered the medical thermometer) are renowned worldwide.

In the last two centuries, the Istrian Italians, who were the majority of the population of Istria under Napoleon, have been in continuous ethnic fighting with the Slavs of Istria. As a consequence, they have been reduced to a small minority, who have survived the Istrian exodus and the Foibe massacres during and after WWII.

According to the Italian Census done in 1936, in the peninsula of Istria there were 294,000 residents; most were Istrian Italians. Here, there are the percentages for all the Istrian cities/districts:

Currently, there are nearly 50,000 Istrian Italians; a small minority of the Istria peninsula population. They are mainly divided between Croatia and Slovenia, but a few thousand still live in Italy (in the coastal city of Muggia near Trieste).

Indeed, in various municipalities in actual Croatia and Slovenia, census data shows that there are still significant numbers of Italians living in Istria, such as 51% of the population of Grožnjan/Grisignana, 37% at Brtonigla/Verteneglio and nearly 30% in Buje/Buie.

All content from Kiddle encyclopedia articles (including the article images and facts) can be freely used under Attribution-ShareAlike license, unless stated otherwise. Cite this article:
Istrian Italians Facts for Kids. Kiddle Encyclopedia.