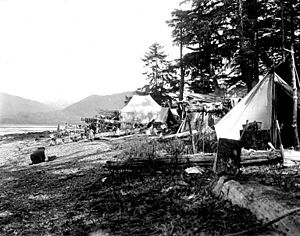 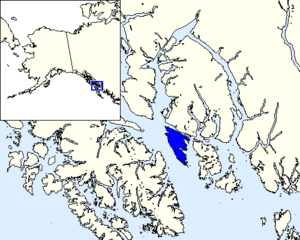 The Spanish explorer Jacinto Caamaño named the Gravina Islands group in 1792. George Vancouver applied the name to Gravina Island itself in 1793. The name honors Federico Carlos Gravina y Nápoli which was originated in the town of Gravina in Puglia, Italy.

Ketchikan International Airport is located on Gravina Island across the Tongass Narrows (½ mile) from Ketchikan and is reached by a ferry service which takes between three and seven minutes and runs at least every half-hour.

Early on the morning of October 18, 2016, a fire was detected in a dwelling on Gravina Island. The fireboat Harry Newell responded. Firefighters were unable to save the building, but prevented the fire spreading. 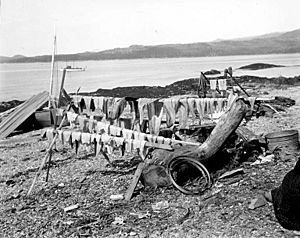 A variety of wildlife and vegetation are found on Gravina Island including a disjunctive population of the Crater Lake Newt, a subspecies of the Rough-skinned Newt, whose northern range is in Alaska.

In 2002, it was proposed that a for-profit prison corporation, Cornell Corrections, build a prison on the island. To connect the island with Ketchikan, it was originally planned that the federal government spend $175 million on building a bridge to the island, and another $75 million to connect it to the power grid with an electrical intertie. The Ketchikan Borough Assembly turned the proposal down when the administration of Governor Tony Knowles also expressed its disfavor to the idea. Eventually, the corporation's prison plans led to the exposure of the wide-ranging Alaska political corruption probe, which eventually ensnared U.S. Senator Ted Stevens. The bridge idea persisted. The 2005 Highway Bill provided for $223 million to build the Gravina Island Bridge between Gravina Island and nearby Ketchikan, on Revillagigedo Island. The provisions and earmarks were negotiated by Alaska's Rep. Don Young, who chaired the House Transportation Committee and were supported by the Chair of the Senate Appropriations Committee, Alaska's Senator Stevens. This bridge, nicknamed "The Bridge to Nowhere" by critics, was intended to replace the auto ferry which is currently the only connection between Ketchikan and its airport. While the federal earmark was withdrawn after meeting opposition from Oklahoma Senator Tom Coburn, though the state of Alaska received $300 million in transportation funding, the state of Alaska continued to study improvements in access to the airport, which could conceivably include improvements to the ferry service. Despite the demise of the bridge proposal, Governor Sarah Palin spent $26 million in transportation funding for the planned access road on the island that ultimately went nowhere.

All content from Kiddle encyclopedia articles (including the article images and facts) can be freely used under Attribution-ShareAlike license, unless stated otherwise. Cite this article:
Gravina Island Facts for Kids. Kiddle Encyclopedia.