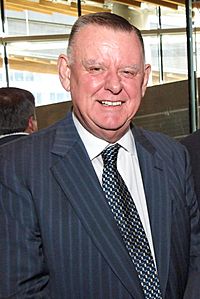 David Osborn Braley OC (May 31, 1941 – October 26, 2020) was a Canadian politician, sports owner and businessman. He was the owner of the BC Lions, the Toronto Argonauts and Hamilton Tiger-Cats. He was appointed to the Senate of Canada in 2010 as a Conservative, but resigned three years later. He was a member of the Order of Canada and the Canadian Football Hall of Fame. He was born in Montreal, Quebec.

Braley died on October 26, 2020 from diabetes-related problems in Burlington, Ontario at the age of 79.

All content from Kiddle encyclopedia articles (including the article images and facts) can be freely used under Attribution-ShareAlike license, unless stated otherwise. Cite this article:
David Braley Facts for Kids. Kiddle Encyclopedia.