Jake Christopher Delhomme born January 10, 1975) is a former American football quarterback who played professionally in the National Football League (NFL). Delhomme played college football at the University of Louisiana at Lafayette, before being signed by the New Orleans Saints as an undrafted free agent after the 1997 NFL Draft.

Delhomme began his professional career as a practice squad player with the Saints in 1997 and 1998 and played in the NFL Europe for two years in between NFL seasons. Returning to the Saints, Delhomme played his first NFL games in 1999. Delhomme played as the Carolina Panthers starting quarterback from 2003 to 2009.

He held most of Carolina's quarterback records. Delhomme led the team to Super Bowl XXXVIII in his first season with Carolina. After his departure from Carolina, Delhomme also played for the Cleveland Browns in 2010 and Houston Texans in 2011. He holds the NFL record for the longest pass in the Super Bowl in NFL History (85-yard pass to Muhsin Muhammad)

Delhomme was born to Jerry and Marcia Delhomme, both Cajuns. Jake's grandfather bred horses, and Jake's father was a jockey who began racing at eight years old. Jake has called horses his "first love", and today he, his father, and his brother own and train thoroughbreds. Delhomme played both quarterback and defensive back for Teurlings Catholic; he made the all-state team in high school not as quarterback, but on defense. In addition, Delhomme was a scholar serving as Senior Beta Club president of his chapter in Louisiana. 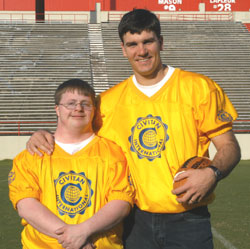 Delhomme married the Keri Melancon in 2000; the two were childhood sweethearts. They have two daughters. Delhomme wears #17 because it is the date of his first daughter's birthday, and she was born after 17 hours of labor. He and his family are Panthers fans. After retiring from football, Jake spends his time breeding, buying and selling racehorses like his father and working in the banking industry.

Delhomme has garnered popularity as a pitch-man for the Cajun fast food restaurant, Bojangles'. One commercial parodies the film Jerry Maguire and the line "Show me the money!"; former teammate with the Panthers Steve Smith is featured in a cameo. Another commercial with Smith portrays the duo as the Dukes of Hazzard, driving The General Lee with a large chicken head on the roof.

Delhomme has also done SunCom Wireless limited edition cell phone commercials that feature a Panthers logo and his signature, and he has appeared in public service announcements for Civitan International. Delhomme is noted for licking his fingers before every play, and sticking his tongue out as part of his focus. The official Panthers website featured a regular discussion with Delhomme during the regular season, known as "Cajun Up with Jake".

All content from Kiddle encyclopedia articles (including the article images and facts) can be freely used under Attribution-ShareAlike license, unless stated otherwise. Cite this article:
Jake Delhomme Facts for Kids. Kiddle Encyclopedia.