MetroWest is a master-planned community in Orlando, a city located in the central portion of the U.S. state of Florida. The 1,805-acre (730 ha) mixed-use community is located southwest of downtown Orlando, with the main entrance situated on MetroWest Boulevard, off of Kirkman Road.

The neighborhood was developed in the 1980s by Debra, Inc., an Orlando-based developer, as a business, commercial and residential community- a place where people can live, work and play. It has over 9,600 residential homes as of 2013 (see Residential neighborhoods below). Housing options in the diverse community of Metrowest include a range of single-family homes with several apartment, townhome and condominium complexes spread over the gently rolling landscape.

MetroWest is managed by the MetroWest Master Association (MWMA), a corporation formed by Debra, Inc., which has the overall responsibility and right in maintaining the standards of all common areas located within the community. Past and future developments, projects and changes in MetroWest are first approved by the association's Design Review Board (DRB) following guidelines for quality and architecture that is harmonious to the present structures and topography. The beautiful award-winning landscaping and clean environment keep MetroWest at the top of the City of Orlando's most beautiful places to live in. 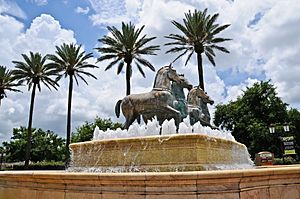 The Horse Fountain at MetroWest Village

The 1,805-acre (730 ha) mixed-use community is located in western Orlando. It is bounded by Kirkman Road to the east; by Turkey Lake to the southeast; by Pembrooke Pines development to the south; by the Florida's Turnpike to the southwest; Apopka-Vineland Road on its western tip; and to the north by Steer Lake Road, Edgewood Children's Ranch, Lake Hiawassee and Orlo Vista, Florida.

Bisecting the middle of the development, winding from north to south, is South Hiawassee Road, which also serves as the main entrance coming from the north and only entrance from the south. The other north entry point is through Lake Vilma Drive, off of Steer Lake Road. There are several entrances on the eastern side of the community, from north to south: Westgate Dr; Raleigh St; the north and south Valencia Community College Dr; north and south Metropolis Way; MetroWest Blvd, the main entrance of the community; and Arnold Palmer Drive. The main entrance of MetroWest is only 2.5 miles (4.0 km) north of Universal Studios Orlando.

Prior to its development, the area south of Hiawassee Road, a county road, was endless rows of orange groves divided between the city limits of Orlando and Orange County. Between 1980 and 1981, Aaron Dowd, vice-president of Debra, Inc. bought the MetroWest Development acreage for $22 million in cash from 23 landowners, in behalf of unidentified investors. Debra Inc. is a Florida company created for the project and was owned by Debra N.V. of the Netherlands Antilles. The real owners of the corporation were never revealed, but Orange County Circuit Court documents involving a real estate commission dispute filed against the company several years ago indicate that a Saudi Arabian banking family are behind the project. 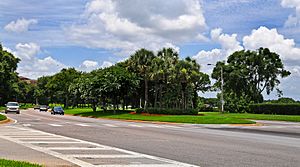 Hiawassee Rd was widened during the construction of MetroWest

The $500 million-plus development gained approval from the City Council on November 15, 1982 and the developer's agreement was accepted by the city on February 28, 1983. Initial work on the development involves the construction of the necessary infrastructures of a community like stormwater drainage system, 2.5 million gallons capacity of sewage system, grading of the undeveloped land and road construction. Hiawassee Road was realigned, extended and widened into a four-lane roadway. Raleigh Street was extended to connect to Hiawassee. Large black tile entrance signs were built north and south on Hiawassee, with a more elaborate entrance with fountains at the main entrance on MetroWest Boulevard off Kirkman Road. Sections within Orange County were annexed to the city limits of Orlando to avail the municipal services of Orlando like police and fire protection, sewage collection and treatment, trash and garbage removal, street and storm drainage maintenance, and utilities. 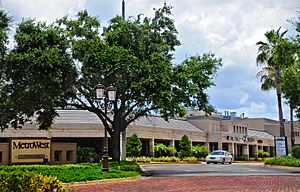 MetroWest Village, the first shopping center established in the community

After five years and an estimated $50 million worth of preparation, tracts of land were sold to developers and builders for residential and business projects. The Metrowest Master Association (MWMA) was established by Debra, Inc. on February 17, 1986 and thereafter, all construction and design plans are first examined by the Design Review Board (DRB) of the MWMA following strict guidelines before approval. The original master plan for the community included up to 4,500 residential units; 6 million square feet of office space, 2.5 million square feet of retail, restaurant, and industrial space; and 3,700 hotel rooms. Like other master-planned communities, the development was designed as a place where people can live, work and play. The 350-acre (140 ha) urban center, where dense development was planned, lies south of MetroWest Blvd and extends to Turkey Lake. The development has an about 1.5 miles (2.4 km) of frontage on the lake.

Work on the Metrowest Golf clubhouse was started in 1986. It was opened and dedicated the following year. The course was first managed by the Arnold Palmer Golf Management. Residential development near the community's 18-hole golf course was started in 1987. By 1989, about 700 single-family homes or villas have been built or planned. Another 1,300 apartment units had been built or were on the drawing boards. Development was also started on the community's most exclusive residential area, Palma Vista, a planned 200-lot subdivision that surrounds the 13th and 14th holes of the golf course on the highest land in the community. The crest of the property, at an elevation of 198 feet (60 m) above sea level, is one of the highest points in Orange County and offers views of downtown Orlando's skyline 5 miles (8.0 km) to the east. The community's first shopping center, MetroWest Village at the corner of S. Hiawassee Rd and Westpointe Blvd, was opened in the fall of 1990 completely leased. 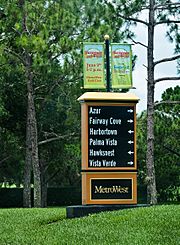 A directory-road sign on Hiawassee Rd showing the neighborhoods in MetroWest.

There are nine subdivisions with single-family homes and one townhome complex in Metrowest with a total 1,259 residential units. 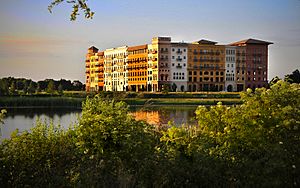 The Residences at Veranda, a 142-unit condominium in MetroWest 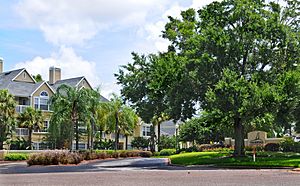 The Tradewinds on S. Hiawassee Rd

Fourteen condominium complexes with over 4,851 residential units. Some of these dwellings were previous apartments converted into condominiums during the housing boom. 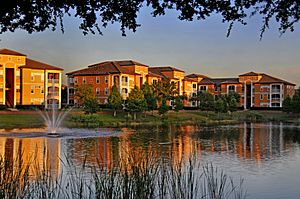 Ten complexes with a total of 3,557 units make up the apartments in MetroWest.

High school students living in MetroWest are zoned to Olympia High School on Apopka-Vineland Road in Orlando, which opened in August 2001.

All content from Kiddle encyclopedia articles (including the article images and facts) can be freely used under Attribution-ShareAlike license, unless stated otherwise. Cite this article:
MetroWest (Orlando) Facts for Kids. Kiddle Encyclopedia.