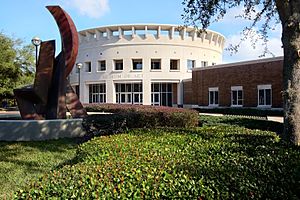 The Orlando Museum of Art (OMA) is a 501 (c) 3 not-for-profit organization directly serving greater Orlando, Orange County and Central Florida. The museum was founded in 1924 by a group of art enthusiasts. The museum's mission is to inspire creativity, passion and intellectual curiosity by connecting people with art and new ideas. Aaron De Groft was appointed to the role of Director and CEO on Feb. 10, 2021.

OMA presents a rotating series of temporary exhibitions originated by the museum matched by traveling shows that are complemented by permanent collection exhibitions and continuous education programs for people of all ages. OMA hosts year-round workshops, art appreciation classes, lectures, seminars, films and guided tours for children and adults.

In 2014, the museum launched the exhibition initiative titled The Florida Prize in Contemporary Art which features work produced by the most progressive and thought-provoking emerging and mid-career artists living and working in the State of Florida today.

OMA is accredited by the American Alliance of Museums (AAM) and is a member of the North American Reciprocal Museums program.

The organization began as a small art center with a group of artists who met informally in the early 1920s, displaying and critiquing their work. In the late 1950s, the community raised funds to build a new facility designed by James Gamble Rogers III, which was completed in 1960.

OMA began to collect art in 1960 when it accepted the donations of important American paintings by Georgia O'Keeffe and Charles Sheeler. OMA continued its expansion, working with architects Nils Schweizer and Duane Stark, both students of Frank Lloyd Wright. By 1969 OMA had added new galleries, a 250-seat auditorium, three studio classrooms, a library, vault and offices.

During the 1970s, OMA was given a major collection of Art of the Ancient Americas, and additional works of African Art, and also formed the nucleus of its acclaimed Contemporary American Graphics Collection.

In 1985, OMA was designated a "major cultural institution" by the State of Florida.

In 1997, OMA completed a $13.5 million facility renovation and building project which expanded the facility to its current size of 80,000 square feet.

On May 1, 2018, OMA announced that it may become the permanent home of an extensive collection of the paintings of Belgian Post-Impressionist painter, Louis Dewis. OMA presented a small exhibition of seven Dewis paintings from May 18 through September 9, 2018, as a preview of a major Dewis exhibition presented January 25 through May 5, 2019.

All content from Kiddle encyclopedia articles (including the article images and facts) can be freely used under Attribution-ShareAlike license, unless stated otherwise. Cite this article:
Orlando Museum of Art Facts for Kids. Kiddle Encyclopedia.