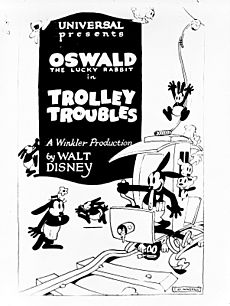 Oswald the Lucky Rabbit is a cartoon character created in 1927 by Walt Disney for Universal Pictures. He starred in several animated short films released to theaters from 1927 to 1938

Disney came up with a new character named Mickey Mouse. The production of Mickey Mouse provided Walt Disney with the money he used to create Disney World.

Later on, Disney bought Oswald back. Disney then made the video-game Epic Mickey, Epic Mickey 2, and Epic Mickey power of illusion.

All content from Kiddle encyclopedia articles (including the article images and facts) can be freely used under Attribution-ShareAlike license, unless stated otherwise. Cite this article:
Oswald the Lucky Rabbit Facts for Kids. Kiddle Encyclopedia.