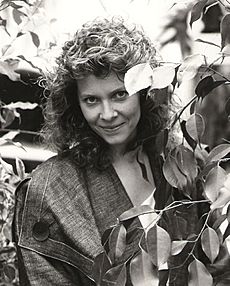 Kate Capshaw (born Kathleen Sue Nail on November 3, 1953 in Fort Worth, Texas) is an American actress. She is the wife of movie director Steven Spielberg.

In 1956, Capshaw's desire to be an actress led her to New York. There she got a role on the soap The Edge of Night.

Capshaw was married to her first husband, Robert Capshaw, from 1976 until their divorce in 1980. In 1982, she made her first movie role. In 1984, she met future husband Spielberg when she beat out 120 actresses for the female lead in Indiana Jones and the Temple of Doom. The two married on October 12, 1991. In 1993, Capshaw became a regular on the brief series Black Tie Affair.

All content from Kiddle encyclopedia articles (including the article images and facts) can be freely used under Attribution-ShareAlike license, unless stated otherwise. Cite this article:
Kate Capshaw Facts for Kids. Kiddle Encyclopedia.