Bloodletting was the name for a medical practice which affected the health of the person. 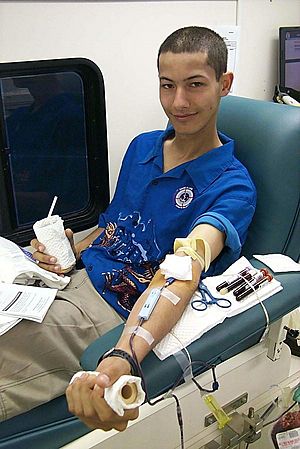 A member of the US Navy donates blood.

The pictogram for blood donation

Blood donation is when a person voluntarily gives blood, which can be used for blood transfusions or to make certain drugs. Blood banks store this blood. The blood can be used to help the victims of accidents, for example. Usually, the blood donor and the donated blood are tested for diseases which spread through the blood. Usually a series of questions also need to be answered to make sure that there is no risk to the person donating.

A special case of blood donation sometimes occurs before a medical operation that is dangerous. People donate their own blood, which can be used after the operation if they lose too much blood.

All content from Kiddle encyclopedia articles (including the article images and facts) can be freely used under Attribution-ShareAlike license, unless stated otherwise. Cite this article:
Blood donation Facts for Kids. Kiddle Encyclopedia.