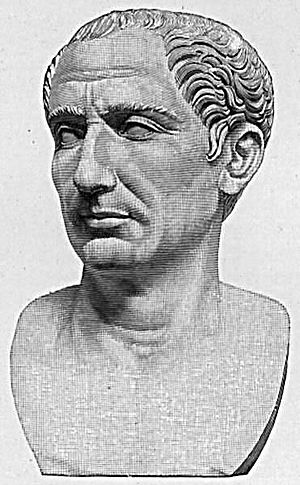 The Caesar cipher is named for Julius Caesar.

The Caesar cipher is a method of cryptography. It is named after Julius Caesar who used it to communicate with his army.

To make a message secret with the Caesar cipher, each letter in the message is changed using a simple rule: change by three. So each letter is replaced by the letter three letters ahead in the alphabet. A becomes D, B becomes E, and so on. For the last letters, we think of the alphabet as a circle and "wrap around." W becomes Z, X becomes A, Y becomes B, and Z becomes C. To change a message back, each letter is replaced by the one three before it. However it is possible to break Caeser Cipher easily using Microsoft Excel, so it may be better to use a much more difficult code.

Changing by three is the rule that Julius Caesar used, but the same idea works for any number. ROT13 is a modern version and even easier to break.

All content from Kiddle encyclopedia articles (including the article images and facts) can be freely used under Attribution-ShareAlike license, unless stated otherwise. Cite this article:
Caesar cipher Facts for Kids. Kiddle Encyclopedia.