Jennifer Audrey Coolidge (born August 28, 1961) is an American actress and comedian. She is best known for playing Stifler's Mom in the American Pie films, Sophie in the CBS sitcom 2 Broke Girls, Bobbie in the sitcom Joey, Paulette in Legally Blonde (2001) and its sequel and Hilary Duff's character's evil stepmother in A Cinderella Story (2004). She is also a regular actor in Christopher Guest's mockumentary films. Coolidge is an alumna of The Groundlings, a comedy troupe based in Los Angeles. 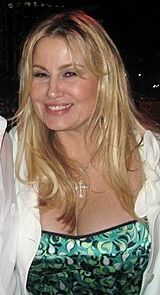 Coolidge was born in Boston, Massachusetts. She was raised in Norwell, Massachusetts, and is one of four children. Coolidge attended Norwell High School, the Cambridge School of Weston, Emerson College in Boston and the American Academy of Dramatic Arts in New York City.

Coolidge is known for her supporting roles in several comedy movies and guest roles on television. She made her first appearance on TV in the Seinfeld episode "The Masseuse". Before gaining recognition, she received small roles. She also voiced Luanne's beauty school teacher Miss Kremzer in a recurring role on King of the Hill. She also acted in many other movies and television programs.

All content from Kiddle encyclopedia articles (including the article images and facts) can be freely used under Attribution-ShareAlike license, unless stated otherwise. Cite this article:
Jennifer Coolidge Facts for Kids. Kiddle Encyclopedia.