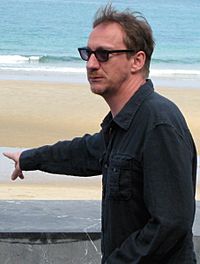 David Thewlis (born 20 March 1963) is an English actor. He is known for his role as Remus Lupin in the Harry Potter movie series, as the Earthworm in James and the Giant Peach and as V.M. Varga in the third season of Fargo.

All content from Kiddle encyclopedia articles (including the article images and facts) can be freely used under Attribution-ShareAlike license, unless stated otherwise. Cite this article:
David Thewlis Facts for Kids. Kiddle Encyclopedia.