City of London School for Girls facts for kids

The school was founded using a bequest by William Ward, in 1894. It was his conviction that girls should be given a broad and liberal education with an emphasis on scholarship. The school has strong links with its brother school - the City of London School is just a 15-minute walk away.

The school is for girls aged 7 to 18. Most pupils enter aged 7 ("7+" for the Prep School), 11 ("11+"), or 16 ("16+", for Sixth Form), although casual vacancies arise occasionally. The school's capacity is roughly 680 pupils. As its success rises, applications to the school continue to climb with new classrooms being continually created to meet this growing demand.

The entrance exam consists of exams in English and Maths. At sixth form level, the entry process is more competitive, with exams being set in each of the subjects they propose to study at as as well as a comprehension paper and logic test.

The school remains relatively ethnically and socially diverse, and is said to be more diverse than other leading London schools in both the state and independent sectors. There are several Societies and Clubs. 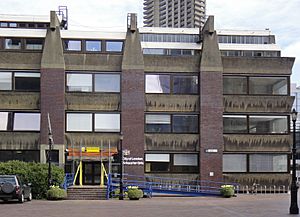 City of London School for Girls

The school has an outstanding academic reputation and leading league table results, it also encourages extracurricular activities. The arts are popular. Furthermore, teachers are encouraged to go 'beyond the syllabus', exploring wider issues to nurture girls in areas that are not examined.

Sports are another strength at City, with clubs, teams and squads in abundance. City encourages girls to take up sports they have never done before and push them when necessary. The school has a swimming pool, a lecture theater, two netball/tennis courts, a drama studio, an all weather playing field and an indoor gym with climbing wall, as well as a gym complete with exercise equipment such as treadmills and weights. Debating is another popular activity.

City has a relatively new house system which consists of four houses. Each girl is allocated a house when they enter the school.

The four houses are:

The School encourages good natured competition. There are a variety of inter-house competitions, including Drama, Debating, Maths, Art, Music, the Inter-House Quiz and at Sports Day, as well as several other sports competitions throughout the year.

All content from Kiddle encyclopedia articles (including the article images and facts) can be freely used under Attribution-ShareAlike license, unless stated otherwise. Cite this article:
City of London School for Girls Facts for Kids. Kiddle Encyclopedia.