The Royal Exchange in London was founded in the 16th century by the merchant Sir Thomas Gresham on the suggestion of his factor Richard Clough to act as a centre of commerce for the City of London. The site was provided by the City of London Corporation and the Worshipful Company of Mercers, who still jointly own the freehold. It is trapezoidal in shape and is flanked by Cornhill and Threadneedle Street, which converge at Bank junction in the heart of the City. It lies in the ward of Cornhill.

It has twice been destroyed by fire and subsequently rebuilt. The present building was designed by Sir William Tite in the 1840s. The site was notably occupied by the Lloyd's insurance market for nearly 150 years. Today the Royal Exchange contains Fortnum & Mason The Bar & Restaurant, luxury shops, and offices.

Traditionally, the steps of the Royal Exchange are the place where certain royal proclamations (such as the dissolution of parliament) are read out by either a herald or a crier. Following the death or abdication of a monarch and the confirmation of the next monarch's accession to the throne by the Accession Council, the Royal Exchange Building is one of the locations where a herald proclaims the new monarch's reign to the public. 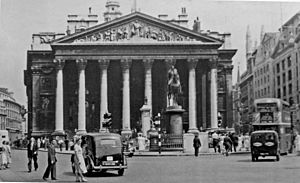 Richard Clough initially suggested building the exchange in 1562, and oversaw the exporting of some of the materials from Antwerp: stone, slate, wainscot and glass, for which he paid thousands of pounds himself. The Royal Exchange was officially opened on 23 January 1571 by Queen Elizabeth I who awarded the building its royal title and a licence to sell alcohol. Only the exchange of goods took place until the 17th century. Stockbrokers were not allowed into the Royal Exchange because of their rude manners, hence they had to operate from other establishments in the vicinity, such as Jonathan's Coffee-House. Gresham's original building was destroyed in the Great Fire of London in 1666. A second complex was built on the site, designed by Edward Jarman and opened in 1669, but that also burned down, on 10 January 1838. It had been used by the Lloyd's insurance market, which was forced to move temporarily to South Sea House following the 1838 fire. 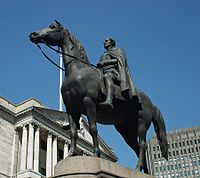 A statue of the Duke of Wellington inaugurated in 1844 outside the Royal Exchange.

The third Royal Exchange building, which still stands today, was designed by William Tite and adheres to the original layout–consisting of a four-sided structure surrounding a central courtyard where merchants and tradesmen could do business. The internal works, designed by Edward I'Anson in 1837, made use of concrete—an early example of this modern construction method. It features pediment sculptures by Richard Westmacott (the younger), and ornamental cast ironwork by Henry Grissell's Regent's Canal Ironworks. It was opened by Queen Victoria on 28 October 1844 though trading did not commence until 1 January 1845.

In June 1844, just before the reopening of the Royal Exchange, a statue of Arthur Wellesley, 1st Duke of Wellington, was unveiled outside the building. The bronze used to cast it was sourced from enemy cannons captured during Wellington's continental campaigns. 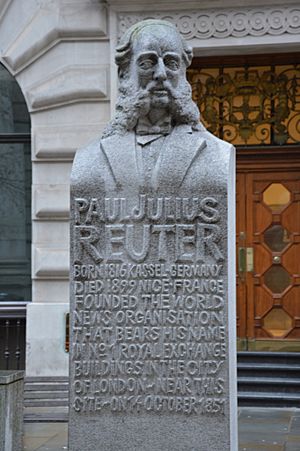 Paul Julius Reuter established the Reuters news agency at No. 1, Royal Exchange Buildings (opposite and to the east of the Royal Exchange) in 1851. It later moved to Fleet Street.

Pediment on the western portico 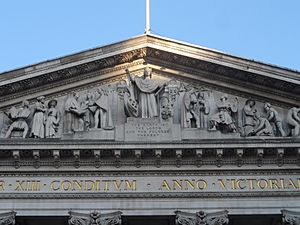 Close-up of the central part of the pediment

The western end of the building consists of a portico of eight Corinthian columns topped by a pediment containing a tympanum with a sculptured frieze by Richard Westmacott (the younger). The central figure represents Commerce, above an inscription from the Bible: "The Earth is the Lord's, and the fulness thereof". The Latin inscription states that the Exchange was founded in the thirteenth year of Queen Elizabeth, and restored in the seventh of Queen Victoria.

Two statues stand in niches in the central courtyard. Charles II a copy of 1792 by John Spiller after Grinling Gibbons' statue in the centre of the C17 courtyard, and Queen Elizabeth I by M.L. Watson, 1844. The Charles II statue survived the fire of 1838 that destroyed the previous Exchange. The Elizabeth I statue was commissioned as she was the monarch who had conferred the status ‘Royal’ on the Exchange.

From 1892, twenty-four scenes from London's history were painted on the first-floor walls by artists including Sir Frederick Leighton, Sir Frank Brangwyn and Stanhope Forbes. The murals run as a sequence.

Alfred the Great repairing the walls of the City of London by Frank O. Salisbury (1912)

Henry VI Battle of Barnet 1471, the Trained Bands marching to the support of Edward IV by John Henry Amschewitz (1911)

Charles I demanding the Five Members at the Guildhall, 1641-42 by Solomon Joseph Solomon (1897)

Opening of the Royal Exchange by Her Majesty Queen Victoria, 28th October 1844 by Robert Walker Macbeth (1895)

With the outbreak of the Second World War, trading at the Royal Exchange virtually ended. At the war's end, the building had survived the Blitz, albeit with some near misses. 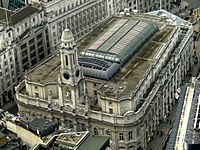 Aerial view of the Royal Exchange

In 1982 the Royal Exchange was in disrepair - particularly the glass roof was in danger of collapse. The newly formed London International Financial Futures Exchange (LIFFE) was the main tenant, using the courtyard for the trading floor, all done without touching the framework of the original building. Other tenants moved in later and as a result of LIFFE's presence, not only did the City experience growth in trading and greater efficiency in pricing, but also a boost to the area around the Royal Exchange that was sleepy at best.

In 2001 the Royal Exchange was once again extensively remodelled, this time by architects Aukett Fitzroy Robinson. Reconstruction of the courtyard created new boutiques and restaurants to add to the existing retailers on the perimeter. The Royal Exchange is now a retail centre with shops, cafes and restaurants. Shops include Boodles, Hermès, Georg Jensen and Tiffany & Co. In 2003 the Grand Café and Bar was launched and completed the building.

In 2013 the Royal Exchange was sold by the Anglo Irish Private Bank to Oxford Properties, a Canadian property company. It had been announced that the site would be sold with a 104-year lease. Oxford Properties Group, a division of the Ontario Municipal Employees Retirement System, bought the retail centre for a reported £86.5 million.

All content from Kiddle encyclopedia articles (including the article images and facts) can be freely used under Attribution-ShareAlike license, unless stated otherwise. Cite this article:
Royal Exchange, London Facts for Kids. Kiddle Encyclopedia.