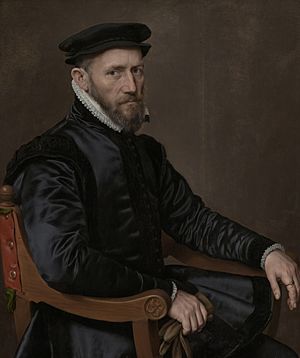 A portrait of Thomas Gresham by Anthonis Mor

Sir Thomas Gresham (c. 1519 – 21 November 1579) was an English merchant who worked for King Edward VI of England and for Edward's half-sister Queen Elizabeth I of England. He was born in London in an old Norfolk family, he was the son of Sir Richard Gresham and had one brother and two sisters. Gresham's law was named after him in 1858.

All content from Kiddle encyclopedia articles (including the article images and facts) can be freely used under Attribution-ShareAlike license, unless stated otherwise. Cite this article:
Thomas Gresham Facts for Kids. Kiddle Encyclopedia.