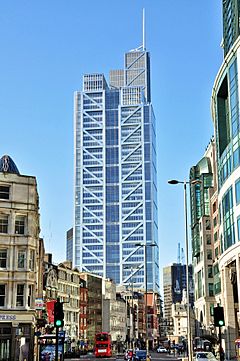 The tower from Bishopsgate

In March 2007, it was confirmed that Heron had signed a funding deal with the State General Reserve Fund of Oman to provide the equity for the development. The works were carried out by Skanska and completed in January 2011.

All content from Kiddle encyclopedia articles (including the article images and facts) can be freely used under Attribution-ShareAlike license, unless stated otherwise. Cite this article:
Heron Tower Facts for Kids. Kiddle Encyclopedia.