Battle of the Mediterranean facts for kids

Each side had three overall goals in this battle. The first was to attack the supply lines of the other side. The second was to keep open its own supply lines, the Axis to their own armies in North Africa and the Allies to supply the island of Malta. The third was to destroy the ability of the opposing navy to wage war at sea.

Outside of the Pacific ocean, the Mediterranean saw the largest conventional naval warfare during the war. In particular, Allied forces struggled to supply and retain the key naval and air base of Malta.

Italian warships had a general reputation as well-designed and good-looking. But some Italian cruiser classes were rather deficient in armour. All Italian warships lacked radar for most of the war, although this was partly offset by their good "rangefinder" and "fire-control" systems. In addition, whereas Allied commanders at sea had discretion on how to act, Italian commanders were closely and precisely governed by Italian Naval Headquarters (Supermarina). This could lead to action being avoided when the Italians had a clear advantage (e.g., During "Operation Hats"). Italian Naval Headquarters was conscious that the British could replace ships lost in the Mediterranean, whereas Italian Navy resources were limited and there was a terrible lack of fuel.

The Italian Navy entered the war with only one year of fuel required to operate normally. By 1943 the lack of fuel prevented naval operations far away from the coasts of Italy.

The Allies had "Ultra" intercepts from Bletchley Park, which predicted the Italian movements, and radar, which enabled them to locate the ships and to range their weapons at distance and at night. The better air reconnaissance skills of the Fleet Air Arm and their close collaboration with surface units were other major causes of the initial Italian defeats (like in the Battle of Cape Matapan). 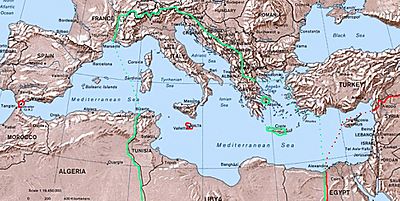 Map of the Italian Mare Nostrum in 1942. The green limits the Italian controlled areas, while the red the British

The Axis forces in this campaign were:-

The Allied forces in this campaign were:-

On 10 June 1940, Italy declared war on Britain and France. On the following day, Italian bombers attacked Malta on what was to be the first of many raids.

The first clash between the rival fleets, the Battle of Calabria, took place on 9 July 1940, just four weeks after the start of hostilities. This was inconclusive (neither side won), and was followed by a series of small ship actions (the battle of the Espero convoy, battle of Cape Spada) during the autumn.

In November, the RN mounted an aerial attack on the Italian fleet in Taranto harbour, crippling three capital ships and changing the balance of power in the Mediterranean.

Three months later the fleets clashed again at the Battle of Cape Matapan. This was a major Allied victory; three Italian cruisers were sunk, and a battleship damaged in a two-day battle ending in a night action.

Following this the Allies suffered heavy losses in the Battle of Crete, supporting the army when the island was invaded by the Germans.

In spring 1941 the Greek and Yugoslavian navy were destroyed and/or made captive by the Italians (with help from the German air force) during the Italo-German war in the western Balkans against Greece and Yugoslavia.

Following the battle of Crete in the summer of 1941, the Royal Navy got the better of things in the central Mediterranean in a series of successful convoy attacks, (such as the Duisburg convoy and the Battle of Cape Bon) until the events around the First Battle of Sirte and the Raid on Alexandria in December swung the balance of power in the Axis favour.

The Italian Navy's most successful attack was when divers planted mines on British battleships during the raid on Alexandria harbour (19 December 1941). HMS Queen Elizabeth and HMS Valiant were sunk (but ten months later raised and returned to active service). During those ten months the Italian Navy enjoyed a temporary control of the Mediterranean sea (called by Mussolini's propaganda the Mare Nostrum, meaning "our sea").

A series of hard fought convoy battles (Second Battle of Sirte in March, Operations Harpoon and Vigorous in June, and Operation Pedestal in August) were victories for the Axis but ensured Malta's survival, until the Allies regained the advantage in November 1942.

In Sept 1943 with the Italian collapse and the surrender of Italian fleet, naval actions in Mediterranean became restricted to actions against U-boats and by small craft in the Adriatic and Aegean seas.

Major surface actions of the campaign

The following are the major amphibious operations staged during the Battle of the Mediterranean:

All content from Kiddle encyclopedia articles (including the article images and facts) can be freely used under Attribution-ShareAlike license, unless stated otherwise. Cite this article:
Battle of the Mediterranean Facts for Kids. Kiddle Encyclopedia.