Mundulla is a town and a locality in south eastern South Australia. The town is located in the local government area of Tatiara District Council about 278 kilometres (173 mi) south east of the state capital of Adelaide.

The name of the town is derived from the Aboriginal word mantala meaning "place of thunder", referring to a rumbling sound made when trampling on the earth. The Council enquired about the spelling in 1965 and the Postmaster General proposed to change it to Mundalla in 1972, but this was not approved by the Geographical Names Board.

In 2016 Mundulla was the subject of an episode of Back Roads. 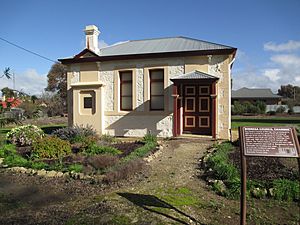 Mundulla has a number of heritage-listed sites, including:

All content from Kiddle encyclopedia articles (including the article images and facts) can be freely used under Attribution-ShareAlike license, unless stated otherwise. Cite this article:
Mundulla Facts for Kids. Kiddle Encyclopedia.