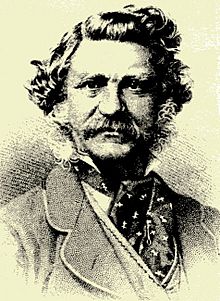 Alexander Tolmer (1815—1890) was the man in charge of the South Australian police force. Born in England to French parents, he studied to be a teacher of languages. He joined the army and saw action in Portugal from 1826—1833 during the civil war. Tolmer moved to South Australia in 1836, where Governor George Gawler thought his background in the cavalry would make a the right person to set up a group of mounted police.

In 1852 Tolmer became the police commissioner. He led a group of police from South Australia to the Victorian gold fields and escorted a load of gold back to Adelaide.

In 1856 after a number of small arguments with his offices, Tolmer was removed as commissioner. He tried farming but this was unsuccessful. He tried to lead an exploring group to cross Australia from south to north, but this also failed before it left Adelaide. He became a ranger for crown lands in 1862 and retired in 1885. He died at Mitcham, South Australia, on 7 March 1890.

All content from Kiddle encyclopedia articles (including the article images and facts) can be freely used under Attribution-ShareAlike license, unless stated otherwise. Cite this article:
Alexander Tolmer Facts for Kids. Kiddle Encyclopedia.