Norwood is a suburb of Adelaide, about 4 km east of the Adelaide city centre. The suburb is in the City of Norwood Payneham & St Peters, the oldest South Australian local government municipality, with a city population over 34,000.

Norwood is named after Norwood, London. It was first laid out in 1847.

The suburb consists of four segments, being divided into north and south by the major thoroughfare of The Parade and east and west by Osmond Terrace. It is bounded on the south by Kensington Road, on the north by Magill Road, on the east by Portrush Road and on the west by Fullarton Road. It is a leafy suburb many of whose streets are lined with plane trees and older houses, though in recent years, due to a State Government initiative of "urban-infill", there have been more higher density (by Adelaide standards) developments. It is now a sought-after suburb to live in, but this was not always the case.

Osmond Terrace is a street with a wide median strip featuring a prominent war memorial commemorating ANZAC soldiers who fought in the first and second World Wars.

The most visible landmarks in Norwood are the Norwood Town Hall and the Clayton-Wesley Uniting Church (previously Clayton Congregational Church) on the north east corner of Portrush Road and The Parade. Actually located in Beulah Park, the church, built over 150 years ago, is visible all the way up The Parade.

Norwood attracted many European migrants post-World War II. It still has a very high concentration of people of Italian background. This is reflected in the restaurants and fashion boutiques of The Parade. Norwood's heritage and bohemian character can be ascertained from the political voting patterns; it tends to be more left-wing in nature than the other eastern suburbs around it. 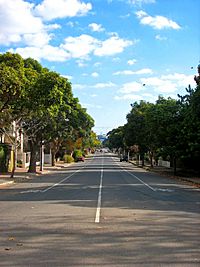 The queen of Adelaide’s eastern suburbs: hip, sassy and smitten with cafe life.The Parade contains the business centre of the suburb, which includes some professional services but it is better known for its restaurants, cafes, fashion boutiques and hairdressers.

All content from Kiddle encyclopedia articles (including the article images and facts) can be freely used under Attribution-ShareAlike license, unless stated otherwise. Cite this article:
Norwood, South Australia Facts for Kids. Kiddle Encyclopedia.