Rutherglen is a small town in north-eastern Victoria, Australia, near the Murray River border with New South Wales. The town was named after the Scottish town of Rutherglen which lies just outside Glasgow. At the 2016 census, Rutherglen had a population of 2,109. 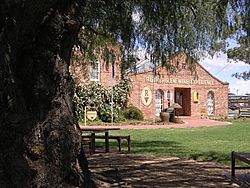 Rutherglen is located north of Wangaratta and west of Wodonga, just 10 kilometres from the Murray River at the border towns of Wahgunyah and Corowa.

Originally a gold-mining town of the mid-19th century, it has since developed into a major wine producing area, with 17 wineries all located within a short drive from the town centre, the best of which are highly regarded by wine critics (Halliday, Parker). The Muscat and Topaque (formerly known as Tokay) wines are sometimes described as having no worldwide equal. The region also produces a good Port style of fortified wine.

The largest winery in the region is the All Saints Winery, located just a short drive north-west outside of Wahgunyah. Established in 1864, it features landscaped gardens, ponds, a restaurant and wine tasting facilities. The Rutherglen Wine Experience Visitor Information Centre, located in the town centre on Main Street, offers displays of the town's rich history, how wines are made, and comprehensive tourist information.

The main street of Rutherglen maintains its historical charm, with most of the shop fronts retaining the same look they had a century ago. Rutherglen Post Office opened on 1 November 1860. Attractions within the town include Lake King which is surrounded by Apex Park and Rutherglen Park, as well as the historical wine-bottle-shaped water tower in Campbell Street.

Golfers play at the course of the Rutherglen Golf Club on Murray Street. The current club professional is Paul Black.

All content from Kiddle encyclopedia articles (including the article images and facts) can be freely used under Attribution-ShareAlike license, unless stated otherwise. Cite this article:
Rutherglen, Victoria Facts for Kids. Kiddle Encyclopedia.