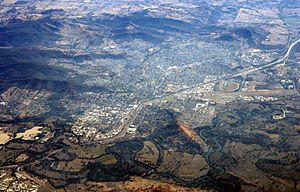 Aerial view of the Albury region 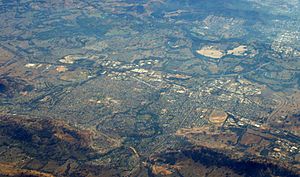 Aerial view of Wodonga, to the left of the stream of water

Albury–Wodonga is the broad settlement incorporating the twin Australian cities of Albury and Wodonga, which are separated geographically by the Murray River and politically by a state border: Albury on the north of the river is part of New South Wales while Wodonga on the south bank is in Victoria.

Although in many senses the centre operates as one community, it has parallel municipal governments and state government services. However, the fact that Melbourne is significantly closer than Sydney and the fact that Victorian television broadcasts in the region, resulting (among other things) in the predominance of Australian rules football in the local media outlets, gives Albury close cultural and social links to Victoria, despite its location in southern New South Wales.

Albury–Wodonga was selected as the primary focus of the federal Whitlam government's scheme to arrest the uncontrolled growth of Australia's large coastal cities (Sydney and Melbourne in particular) by encouraging decentralisation. Grand plans were made to turn Albury–Wodonga into a major inland city. Some industries were enticed to move there, and a certain amount of population movement resulted. However, due to the subsequent Fraser Government's repudiation of Labor's decentralisation policies, the plan to populate inland areas and cities other than the State capitals was abandoned. No other Commonwealth Government since, either conservative or Labor, has made any attempt at repopulating inland areas. Thus the current Albury–Wodonga population is far below the 300,000 projected by Gough Whitlam in the 1970s. The population increased by 1.1% per year on average from 81,540 in 2008 to 86,274 in 2013.

The industrial employment sector has meant that Albury–Wodonga, unusually for an Australian inland city, is not dependent on agriculture. According to the most recently available figures from the Australian Bureau of Statistics, the average income of the Albury area is $36K per year, below the $42K average for the state of New South Wales.

All content from Kiddle encyclopedia articles (including the article images and facts) can be freely used under Attribution-ShareAlike license, unless stated otherwise. Cite this article:
Albury–Wodonga Facts for Kids. Kiddle Encyclopedia.