Barellan is a small town in Narrandera Shire in the Riverina region of New South Wales, Australia. On Census night 2016, Barellan had declined to a population of 538. It is a quiet Riverina wheat town on the Burley Griffin Way, with characteristic silos, and functions primarily as a service centre for the surrounding agricultural area. 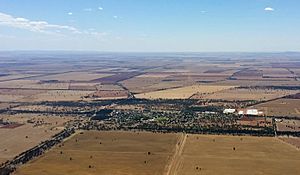 An aerial view of Barellan in February 2014.

The Commercial Hotel, "a typically large and rather gracious hotel with an impressive upper verandah", was built in 1924.

Barellan was also the first town to have a Country Women's Association (CWA) rest house; built in 1924, the same year as the hotel.

In 2009, Barellan celebrated its centenary.

Unlike many rural localities in the area, the population level has fluctuated over a number of years, evidenced as follows:

Barellan is notable as the childhood home of the tennis-player, Evonne Goolagong (now Evonne Cawley). There is a small plaque honouring her in the main street. Evonne Goolagong was born in nearby Griffith on 31 July 1951 and attended Barellan Primary School. Although Aboriginal people faced widespread discrimination in rural Australia at this time, Evonne was able to play tennis in Barellan from childhood thanks to a kindly resident, Bill Kurtzman, who saw her peering through the fence at the local courts and encouraged her to come in and play. Goolagong left Barellan to attend Willoughby Girls High School in Sydney where she was able to further develop her tennis-playing skills.

A 13.8 metres (45 ft) long replica of a tennis racquet used by Evonne Goolagong has been built in Evonne Goolagong Park. Goolagong unveiled the exact scale model of the wooden Dunlop racquet during Barellan's centenary celebrations on 3 October 2009.

Barellan has a central school that goes from kindergarten to year 12 and has about 129 enrolled students. Barellan is part of the RAP (Riverina Access Program) which allows the year 11 and 12 students to complete their HSC. It comprises students from Hillston Central, Ardlethan Central and Ariah Park Central in video conferencing.In 2010, Oaklands Central and Urana Central Schools entered the Partnership.

All content from Kiddle encyclopedia articles (including the article images and facts) can be freely used under Attribution-ShareAlike license, unless stated otherwise. Cite this article:
Barellan Facts for Kids. Kiddle Encyclopedia.