Kids Encyclopedia Facts
Not to be confused with The Rocks, New South Wales.

The Rock is a town with a population of 1,236, in the Riverina region of southern New South Wales, Australia, in Lockhart Shire. It is 32 kilometres (20 mi) south-west of Wagga Wagga on the Olympic Highway.

The town is named after the large rocky hill overlooking the town, now called The Rock Hill but called Yerong in the local indigenous language. The reserve that includes The Rock Hill is an attraction in the area for bush-walking, rock-climbing, and observation of wildlife. It is also an Aboriginal sacred site, called Kengal.

It is a railway junction town, being the junction point of the Boree Creek line from the Main South line. The Rock railway station is served by the twice daily NSW TrainLink XPT service to Melbourne and Sydney. 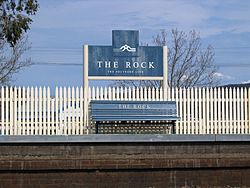 The Rock Football Club was an Australian Rules Football club that was established in 1900 after a meeting at the King's Own Hotel. The club has played in the following football competitions -

All content from Kiddle encyclopedia articles (including the article images and facts) can be freely used under Attribution-ShareAlike license, unless stated otherwise. Cite this article:
The Rock, New South Wales Facts for Kids. Kiddle Encyclopedia.