Leeton is a town located in the Riverina region of southern New South Wales, Australia. Situated approximately 550 km west of Sydney and 450 km north of Melbourne in the Murrumbidgee Irrigation Area, it is the administrative centre of the Leeton Shire Council local government area. Leeton's urban population in 2016 was 6,931. Situated in one of the most productive farming regions in the state, the town was designed by Walter Burley Griffin and purpose-built for the irrigation schemes announced by the New South Wales government in the early 1900s. Citrus, rice, cotton, grapes, walnuts and wheat farms can all be found throughout the Leeton Shire. Leeton is renowned as Australia's Rice Capital and as The Heart of SunRice Country, as it is home to the SunRice headquarters. Other industry includes the Arnott’s Group (previously Freedom Foods), the Daily Drinks Co., JBS Australia, Webster Limited (walnuts and cotton) and Murrumbidgee Irrigation Limited. 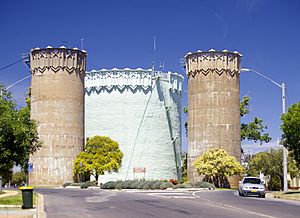 The town is named after Charles Alfred Lee, a Minister for Public Works in New South Wales from 1904 to 1910.

In 1912 a water tower was built to supply water to the then tent town. Leeton Post Office opened on 6 September 1912.

In 1913 when the Water Conservation and Irrigation Commission of New South Wales was formed Leeton was only a canvas town, the only houses being those built on farms by settlers and houses for its officers by the Commission. On 3 April 1913 the first block of land was sold in the town. During 1913 a kurrajong tree which became known as the Pioneers' Tree, was planted as a feature in Kurrajong Avenue, and a butter factory was established in the town.

In 1914 World War I broke out; of the town's population of 2000 people, 200 men were serving in the armed forces making it difficult to maintain the plantings in the irrigation area. During 1914 and 1915 an abattoir and canning factory were established in the town.

In August 1913 Walter Burley Griffin visited the town to complete its design. 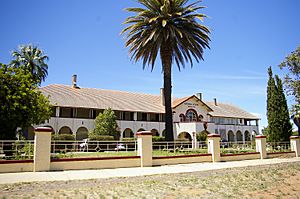 In 1919 the Hydro Hotel was constructed for Water Conservation and Irrigation Commission executives to stay whilst in Leeton but was not licensed to sell alcohol until 1924 when the alcohol prohibition in the Murrumbidgee Irrigation Area was lifted.

During 1920 the Water Conservation and Irrigation Commission of New South Wales began to pressure the Government for relief for being responsible for providing civic and local government services with the Commission stating "revenue which comes mainly from rents and water charges, having remained unchanged, is insufficient to cover the cost of local government services now that the weekly wage is more than double the figure paid when the settlement started". The Commission chose and appointed an Advisory Board which was made up of pioneer farmers which already had been in operation in the Yanco area since 1913. In June 1925 the Commission released its annual report stating that a Royal Commission recommended setting up of local government bodies within the Murrumbidgee Irrigation Area but no date had been decided.

On 1 January 1928 the Willimbong Shire was formed with the name "Willimbong" being retained until 19 July 1946 when it was renamed as Leeton Shire. 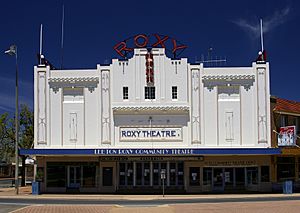 In 1929 the Roxy Theatre was built on a large vacant block of land on the corner of Wade and Pine Avenue and was completed and opened in April 1930.

In 1930 Willimbong Shire become the trustee of the Leeton Racecourse, established in 1912, when the land was gazetted as a reserve for racing, public recreation and aviation. In August 1931 Southern Cross became the first aircraft to officially landing at the aerodrome. During 1935 work was done at the aerodrome for it to be licensed to take aircraft including commercial aircraft. In August 1935 Western and Southern Provincial (W.A.S.P.) Airlines commenced an air service between Leeton and Sydney however the service was ended in 1936 when a Tugan Gannet aircraft used by W.A.S.P. Airlines crashed on 26 February 1936 in the Cordeaux Dam area.

In July 1938 it was proposed to the Willimbong Shire by the Civil Aviation Board that an area around Fivebough could be developed into an aerodrome since the Leeton Aerodrome at the race course was too small and could only operate on a restricted licence. Willimbong Shire agreed to lease the land with preliminary work carried out on the site however the aerodrome was never used by any commercial airline.

During World War II, the Royal Australian Air Force established a training school in the nearby town of Narrandera which was a large aerodrome. After this a report from the Department of Civil Aviation stated that Fivebough was eminently suitable as an aerodrome but strongly recommended that they should consider jointly operating the aerodrome with Narrandera Shire.

During the early part of the 1930s Willimbong Shire took over the town water supply when it also became apparent that the town needed a second water tower which was constructed next to the first tower with the construction completed on 27 March 1937.

The Swimming baths in Leeton was constructed by voluntary labour in 1931 and was completed on 24 February 1932. The Leeton Swimming Club made a request that the swimming baths be replaced by a modern swimming complex. In 1959 money was raised though the Irrigana Festival, which was a biennial festival in the town, with the Leeton Shire obtaining a loan with construction starting on the complex. On 17 November 1962 the Leeton & District Memorial Swimming Pool was opened.

Rice growing became a major industry during World War II under Government promotion to help supply food for troops. A number of local farmers, some such as Norm Houghton only teenagers, pioneered the planting of new varieties to suit the local conditions. The Irrigana Festival began in 1959 as a biennial festival but was short lived due to it lacking strong publicity value even though the festival was successful with fund raising. The name "Irrigana" was chosen from a competition in the Murrumbidgee Irrigator, In 1970 a biennial festival returned in the town known as the "Rice Bowl Festival". By 1988 the festival was renamed to "Sunwhite Rice Festival" with sponsorship from the Ricegrowers Co-Operative Limited.

Leeton has a semi-arid climate (BSk), with hot dry summers and cool winters. 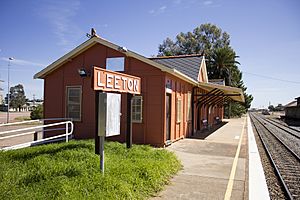 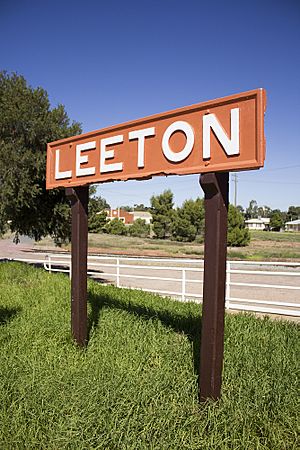 Leeton is connected very well to the surrounding regional centres and capital cities. Leeton is approximately 450 km from Melbourne along the Newell Highway, Goulburn Valley Highway and Hume Highway and 550 km from Sydney along the Sturt and Hume Highways. There are daily flights leaving Narrandera Airport, operated by Regional Express (REX). The airport is located near the shire boundary approximately 20 km from the CBD. There are coach services to Sydney and Adelaide, leaving Leeton Coach Terminal in Gidgee Street daily. NSW TrainLink also offers coach services to Wagga Wagga to link the Sydney–Melbourne XPT daily. The Griffith Xplorer train to and from Sydney arrives at Leeton Railway Station on weekends. 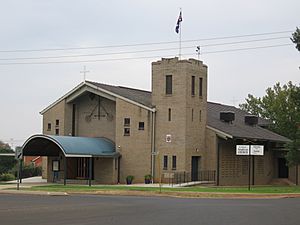 Most of Leeton's growth has occurred in the residential sector. New housing estates include: Golf Club Estate, Noble Park Estate and Letona Estate.

Leeton is very community based, and many new community projects occur. Recent projects include the establishment of sections of the new town bike track network, regional skate park, indoor recreation centre and the federation stage in Mountford Park..

Australian poet and writer Henry Lawson lived in Leeton for two years, from 1916 to 1917. Lawson had been hired to write about the Murrumbidgee Irrigation Area to attract settlers to the area. 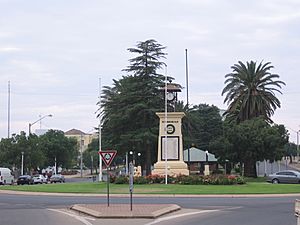 Leeton is the second largest educational centre in the Riverina after Wagga Wagga.

All content from Kiddle encyclopedia articles (including the article images and facts) can be freely used under Attribution-ShareAlike license, unless stated otherwise. Cite this article:
Leeton, New South Wales Facts for Kids. Kiddle Encyclopedia.