Whitton is a small town located in Leeton Shire in the Australian state of New South Wales. Founded in 1850, it is named after John Whitton (1820–98), Engineer-in-Charge of the New South Wales Government Railways. The railway reached Whitton in 1881. At the 2006 census, Whitton had a population of 394. 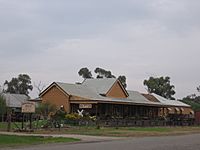 All content from Kiddle encyclopedia articles (including the article images and facts) can be freely used under Attribution-ShareAlike license, unless stated otherwise. Cite this article:
Whitton, New South Wales Facts for Kids. Kiddle Encyclopedia.