Tumut is a town in the Riverina region of New South Wales, Australia, situated on the banks of the Tumut River.

Tumut sits on the north-west foothills of the Snowy Mountains and is located on the traditional lands of the Wiradjuri, Wolgalu and Ngunnawal Aboriginal peoples.

Tumut is often referred to as the 'gateway to the snowy' Snowy Mountains Scheme. The former Tumut Shire was administered from offices located in the town. Tumut is approximately 410 kilometres (250 mi) south-west of Sydney and 525 kilometres (330 mi) north-east of Melbourne.

Tumut is home to a number of historic buildings, including an Anglican church designed by Edmund Blacket and a Courthouse designed by James Barnet. Many of the pubs in the town have been in use from the mid to late 1800s.

Early settlers established many European deciduous trees throughout the area. The stand of Poplars, Elm and Willow, amongst others, create a well renowned display of colour over autumn. Tumut celebrates this with the yearly Festival of the Falling Leaf.

The name Tumut is derived from an Indigenous name for the area (possibly Wiradjuri) (possibly 'doo-maaht'(?)) a word thought to mean "a quiet resting place by the river". 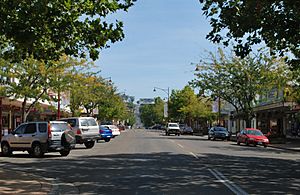 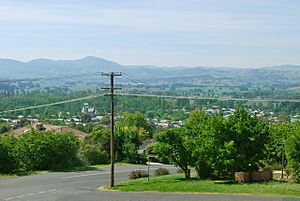 The town from the Rotary Lookout

Tumut Post Office opened 1 January 1849. A public hospital opened in the town in 1900. After many years of lobbying by the local community, construction of the railway line from Gundagai began in 1901, reaching Tumut by 1903 with the first train arriving on 2 December that year. A further extension was built to Batlow and Kunama from a junction at Gilmore, a few kilometres southwest of Tumut. Train services were progressively reduced in the early 1980s before the final trains to Cootamundra ran in January 1984 before being suspended when flood damage to the line was deemed not economical to repair.

Tumut was one of the ten areas short-listed in 1908 as a site for the Australian Capital Territory. Other locations that were short-listed include Albury, Armidale, Bombala, Dalgety, Lake George, Orange, Tooma, Lyndhurst and Yass-Canberra. An earlier vote following inspections of potential sites in 1902 saw the new Federal House of Representatives vote in favour of Tumut as the location for the capital, however the Senate favoured Bombala so no consensus was reached.

The town's rugby league team competed in the Riverina Maher Cup competition, beginning as a fixture between teams from Gundagai and Tumut under rugby union rules in 1920, before switching to league rules in 1921.

Tumut is situated on the Snowy Mountains Highway, but is connected by secondary roads to Gundagai as well as alternative routes to Canberra across the Brindabella Range via Brindabella Road and Wee Jasper Road. Despite being more direct, the terrain and road conditions limit traffic via these routes. This has led to calls by the council and local businesses for funding to upgrade the Brindabella Road, as the increased traffic would provide the town greater economic opportunities.

The town was served by a railway branch line from Cootamundra, which operated from 1903 until 1984, when services were suspended due to flooding. Although the line is not formally closed, it is unlikely to see service again with sections of track lifted during upgrades to the Hume Highway near Gundagai.

Tumut Shire operates Tumut Airport, a small facility located a few kilometres out of town catering to general aviation. Currently there are no scheduled services to the airport.

Tumut is the centre of a softwood industry based on plantation Pinus radiata. CarterHoltHarvey Woodproducts (Central and Northern Regions) Pty Ltd operate a major sawmill on Adelong Road (the Snowy Mountains Highway) and a chipboard panel factory next door. 8 km further west on the Snowy Mountains Highway at Gilmore the company also operates a sawlog processing plant.

The Visy Industries pulp and paper mill is located north of the Snowy Mountains Highway at Gadara (between Tumut and Adelong). The Visy mill is the only paper mill owned by Visy that makes paper from wood (their other mills all use recycled paper as the raw material), and is one of the biggest wood mills in Australia.

All content from Kiddle encyclopedia articles (including the article images and facts) can be freely used under Attribution-ShareAlike license, unless stated otherwise. Cite this article:
Tumut Facts for Kids. Kiddle Encyclopedia.