Batlow is a town in the South West Slopes region of New South Wales, Australia, on the edge of the Great Dividing Range, 775 m above sea level.

Batlow is well known for its apples. About 50 growers in the district supply 1.6 million cases of apples, or 10% of the Australian apple crop, to the Australian market. The district also produces cherries and stone fruit. The town's main landmark, the "Big Apple", which stands on private land 5 km north of the town, stands testament to the orchards which have been vital to the town's economy for over 120 years.

Before European settlement the Wiradjuri people lived in the Batlow area. Hamilton Hume and William Hovell were the first Europeans to explore the area in 1824, en route to Port Phillip.

When gold was discovered in the area in 1854, a small settlement called Reedy Creek was established as a supply point and service centre for the mining area, and a Mr Batlow surveyed a townsite nearby. The gold deposits were quickly exhausted, but farmers found the area better suited to a variety of crops, so the mining supply point was moved and the current township established around 1855. Reedy Flat Post Office opened on 1 August 1873 and was renamed Batlow in 1889. Fruit trees and timber quickly became the main sources of income for the town, and in 1910 the townsite was gazetted.

In 1922, the first cool stores in New South Wales were constructed in the town. At the same time a railway was built from nearby Tumut. These developments facilitated the town's trade with Sydney and beyond. The district supplied troops with dehydrated fruit and vegetables during World War II. Many Land Army Girls were stationed in and around Batlow during the Second World War and a sizeable collection of memorabilia is held at the Historical Society Museum. There are two Soldier Settlements close to Batlow, Willigobung and Kunama. 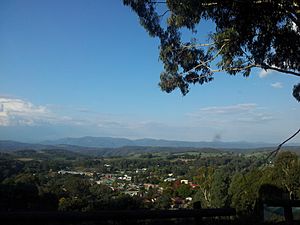 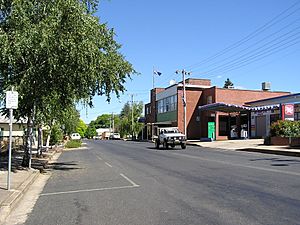 Batlow is located 94 kilometres (58 mi) west of Canberra, though, by highway is approximately 225 kilometres (140 mi) due to the Great Dividing Range between them. The nearest city is Wagga, while three towns, Tumut in the northeast, Adelong in the northwest, and Tumbarumba are within 40 kilometres (25 mi) south.

The countryside around Batlow is a plateau of rolling hills, just under 1,000 metres (3,300 ft) in altitude. Being on the western edge of the Great Dividing Range, Batlow receives much of the precipitation that has not fallen further west, an average of 1,300 millimetres (51 in) per year. Little or no rain is received from ocean to the east, due to the large distances and the Great Dividing Range. The cold winters combined with the higher rainfall and good soils make an excellent apple growing climate. However, in 2006, Batlow experienced the most severe downturn in rainfall in New South Wales, receiving only 392 millimetres (15.4 in) of rain that year. 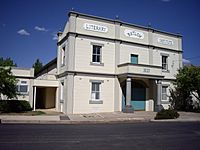 Batlow is an agricultural town offering services and facilities to the surrounding area, including two primary schools and a high school, a library (with telecentre), a hall and several stores and small businesses. The Batlow Fruit Co-operative, trading since 1922, is based in the town.

Batlow was the home of the 'Mountain Maid' cannery until its closure in the early 2000s. The steel frame of the WWII Lend Lease–constructed building used in the production of food for the allied troops is still visible today.

Batlow's economy turns around the production of apples for the fresh food market. Some revenue is also obtained from other agricultural exploitations and timber from the large soft and hardwood plantations. There is a strong influx of seasonal labour for the harvesting of fruit from March to April. A smaller influx occurs at thinning time in December. There are a number of producers of cherries, nuts, honey and eucalyptus oil products.

Batlow is now the home to a truffery, a number of published authors and novice film makers.

On the third Saturday of May each year the Batlow Ciderfest is held in the main street showcasing locally produced cider and regional food. Many interesting stalls also attend the family friendly Ciderfest event.The Ciderfest recently came second in the NSW Event awards after only beginning three years ago. On the Friday preceding a Cider Industry Conference is held. On the third Saturday of October the Apple Blossom Festival is held. This re-invigorated festival begun in 1942 and the First Apple Blossom Queen was a Land army girl.

Farmers markets are held every two months on the first Sunday of month from 8am to 2pm at Memorial Park.

All content from Kiddle encyclopedia articles (including the article images and facts) can be freely used under Attribution-ShareAlike license, unless stated otherwise. Cite this article:
Batlow, New South Wales Facts for Kids. Kiddle Encyclopedia.