Coleambally is a small town in the Riverina of New South Wales, Australia, in Murrumbidgee Council.

Coleambally is one of the newest towns in the state of New South Wales, officially opened in June 1968, with the Post Office opening on 1 April 1970.

Designed to act as the centre for the surrounding Coleambally Irrigation Area, at the 2016 census, Coleambally had a population of 1331.

Its name is Aboriginal, probably meaning a swift in flight. The spine-tailed swift is one of the most powerful fliers known, wheeling and sweeping at high speed in search of flying insects.

Coleambally is home to some of the most endangered species in Australia, the Bittern, Southern Bell Frog and it has many other species of native flora and fauna. Coleambally has many kangaroos and birds, Galahs and Noisy Minors.

The Coleambally Irrigation Area scheme was started in the 1950s, with potential farmland being made available through a ballot system. Those who entered the ballot had to prove they had enough money to set up a farm in order to enter, as the land they acquired started off with no fencing or infrastructure whatsoever. The successful ballot winners were also required to give up any other primary interests they may have held. They were to give all or nothing to Coleambally.

In 2008, following the Federal Government's proposals to buy large amounts of water from irrigators — ostensibly to "save" the Murray-Darling Basin — the Coleambally Irrigation Area offered the entire area, including the farms, water rights and the entire town, for sale at a price of $3.5 billion.

Coleambally's distinctive wine glass shaped water tower is located in the centre of town. A Bucyrus Class Dragline is located in the Lions Park at the entrance of the town. It is one of four machines imported from the United States in 1935 to excavate the main irrigation channels in the Murray Valley and the Coleambally Irrigation Area in the early 1960s. 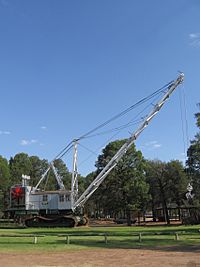 The Bucyrus Class Dragline at Coleambally. This is one of four used to excavate the main irrigation channels in the area. 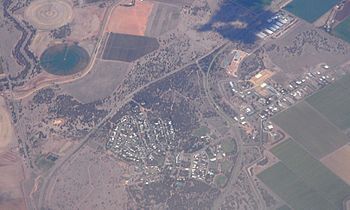 There are two schools in Coleambally: Coleambally Central School, a comprehensive government school catering for students from Kindergarten to Year 12, and St Peter's Primary School, a Roman Catholic school administered by the Diocese of Wagga Wagga.

All content from Kiddle encyclopedia articles (including the article images and facts) can be freely used under Attribution-ShareAlike license, unless stated otherwise. Cite this article:
Coleambally Facts for Kids. Kiddle Encyclopedia.