The first pastoral run near present-day Darlington Point, on the north bank of the Murrumbidgee, was taken up in 1844 by John Peter; he named the run "Cuba" after the Aboriginal word for a locally-common Acacia tree.  On the south bank John Peter also leased the "Tubbo" run, a property he had formed in the 1850s by the amalgamation of several runs.  The site where the township later developed was a crossing-place over the Murrumbidgee River used by stockmen and teamsters.  The Surveyor Townshend laid out reserves near the crossing-place during the 1850s. 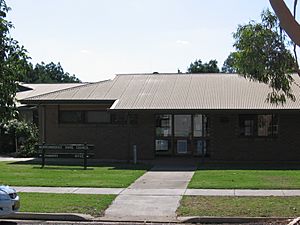 In 1864 George Rogers acquired 56 acres (22.7 ha) of "Cuba" station.  He built the Darlington Inn about two miles (3 km) west of "Cuba" homestead at the junction of the Wagga Wagga to Hay road and the track leading to the river-crossing.  Rogers soon became discontented; he sold out a year later and left the district.  The new publican of the Darlington Inn was Jacob Abrahams.  Another hotel (probably the Waddai Hotel) was built on the southern bank at the crossing (eventually leading to the development of the Waddai township).  A report published in August 1865 claimed that Darlington Point, by "the growth of free selection", was "fast assuming the dimensions and appearance of a township"; there were two hotels, one on either side of the river, which the writer concluded "can hardly be regarded as a favourable sign".

In 1876 the steamer company McCulloch and Co. leased 5 acres (2.0 ha) on the river where they established a wool receiving store, a general store and erected a small wharf.  By 1880 the timber trade was booming with a high demand for railway timber; G. H. Risbey from Narrandera erected a small mill near Darlington Point to cut red-gum. Darlington Point Post Office opened on 1 November 1876.

Darlington Point township was half a mile from the punt where, on the opposite bank, the southern township – "called by the native name ‘Wadai’" – was located.  In April 1881 it was reported that "Darlington and Wadai collectively contain a population of about 120".  The adjoining townships had three hotels, three stores, "and the usual concomitants of a bush town".

From 1881 onwards it appears the Punt Hotel replaced the Riverine Hotel at Waddai (possibly a name-change of the existing hotel). The licenses at both townships for the year commencing 1 July 1881 were: Coach and Horses Hotel at Darlington Point (John Bowman); Waddai Hotel (William Whyte) and Punt Hotel (James Slattery), both at Waddai.

In 1882 a public school was opened with Mrs. J. Carroll in charge.  In June 1882 it was reported that a move had been instigated to have the Government buildings removed to the south side of the river.  By 1883 a post-office, courthouse, police barracks, school and telegraph service had been established at the township.

As the town centre became established in the southern township the name 'Darlington Point' was eventually used for the settlements on both banks of the river. The town's main street is called Punt Road, a reminder of the public transport service that operated to ferry vehicles, stock and passengers across the river. The place-name of ‘Waddai’ seems to have been transferred; the small cluster of buildings at the junction of Kidman Way and the Sturt Highway became known as Waddi.

A lift bridge was built in 1905, joining the communities on either side of the river. The structure was replaced in 1979 by a concrete bridge. Part of the old bridge was reconstructed for the Australian Bicentenary celebrations and can now be found at the entrance to the Darlington Point Riverside Caravan Park which is located on a bend along the Banks of the Murrumbidgee River.

In 1880 the Rev. John Brown Gribble, a Congregational minister, established an Aboriginal mission on "Warangesda" station, 3 kilometres (1.9 mi) from Waddai township (near the crossing-place on the south bank). The New South Wales Government granted a reserve of 600 acres (243 ha) for the purpose, which became known as the Camp of Mercy.

The annual report of the Aborigines Protection Board for 1911 in regard to the Warangesda mission reported "a quiet and uneventful year, though five convictions had been obtained for the supply of liquor to the Aborigines". As of 31 December 1911 there were 151 residents on the station, comprising "full-bloods: 26 adults and 5 children" and "half-castes: 73 adults and 47 children". The area of land under cultivation was 100 acres (40.5 ha), mostly of wheat but also including 5 acres (2.0 ha) of barley.  The yield included a quantity of hay and 40 bags of wheat.

The Warangesda mission was closed by the Aborigines Protection Board in 1924 and the Aboriginal residents were moved to the 'police paddock', a plot of land behind the police station. The remains of an adobe building from this time can be seen in a paddock on "Warangesda" station (between Darlington Point township and the Sturt Highway).  The mission bell now hangs in St Paul's Anglican Church in town.

All content from Kiddle encyclopedia articles (including the article images and facts) can be freely used under Attribution-ShareAlike license, unless stated otherwise. Cite this article:
Darlington Point Facts for Kids. Kiddle Encyclopedia.