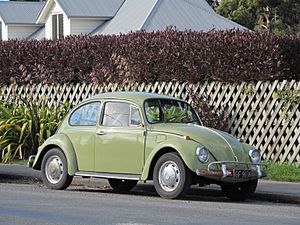 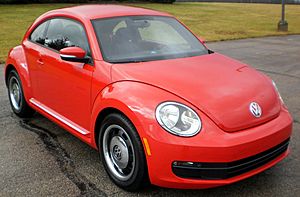 Punch buggy (also called punch bug, punch car, punch dub, piggy punch, slug bug, or beetle bug) is a car game generally played by children in which participants punch each other on the arm upon first sight of a Volkswagen Beetle while calling out "Punch buggy!" or "Slug bug!" in reference to the Beetle's nickname, the Bug. The color of the Beetle is also sometimes stated along with the comment, "No punch backs!" 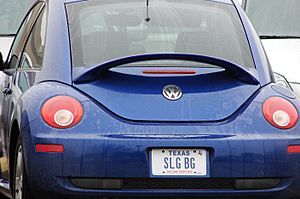 Some variations consider the 1998-2010 Beetle and 2011-2019 Beetle invalid for game purposes but as older models become rarer, variations may choose to include the new Beetles. Others allow "classic" Beetles to count for two punches.

In Brazil, a popular version of the game is played when a blue Volkswagen Beetle is seen. The first individual to notice it has to scream 'Fusca Azul', which stands for 'Blue Beetle', while others close their arms around their breasts and say 'Fechei' (I closed it), and the person who forgets or refuses to say 'Fechei' may have their arm punched as a punishment.

All content from Kiddle encyclopedia articles (including the article images and facts) can be freely used under Attribution-ShareAlike license, unless stated otherwise. Cite this article:
Punch buggy Facts for Kids. Kiddle Encyclopedia.