Anthonij (Anton) Rudolf Mauve (18 September 1838, Zaandam, North Holland – 5 February 1888, Arnhem) was a Dutch realist painter who was a leading member of the Hague School. He signed his paintings 'A. Mauve' or with a monogrammed 'A.M.'. He had a great influence on his cousin-in-law Vincent van Gogh.

Mauve mostly painted people and animals shown outdoors. The paining Morning Ride shows well-dressed riders at the coast of the sea, as they ride away from the viewer. One detail which is uncommon, but shows his realism are the horse droppings shown in the foreground of the picture. His best-known paintings show peasants working in the fields, and sheep-herding scenes. 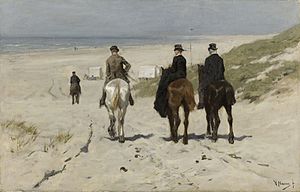 Morning Ride on the Beach (1876), oil on canvas, Rijksmuseum

All content from Kiddle encyclopedia articles (including the article images and facts) can be freely used under Attribution-ShareAlike license, unless stated otherwise. Cite this article:
Anton Mauve Facts for Kids. Kiddle Encyclopedia.