Johan Anthoniszoon "Jan" van Riebeeck (21 April 1619 – 18 January 1677) was a Dutch navigator and colonial administrator who founded Cape Town in what then became the Dutch Cape Colony of the Dutch East India Company. 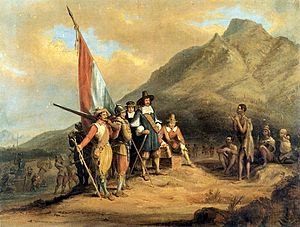 Van Riebeeck was born in Culemborg, as the son of a surgeon. He grew up in Schiedam, where he married 19-year-old Maria de la Quellerie on 28 March 1649. She died in Malacca, now part of Malaysia, on 2 November 1664, at the age of 35. The couple had eight or nine children, most of whom did not survive infancy. Their son Abraham van Riebeeck, born at the Cape, later became Governor-General of the Dutch East Indies.

Joining the Vereenigde Oost-Indische Compagnie (VOC) (Dutch East India Company) in 1639, he served in a number of posts, including that of an assistant surgeon in the Batavia in the East Indies.

He was head of the VOC trading post in Tonkin, Indochina.

In 1643, Riebeeck travelled with Jan van Elseracq to the VOC outpost at Dejima in Japan. Seven years later in 1650, he proposed selling hides of South African wild animals to Japan.

In 1651, he volunteered to undertake the command of the initial Dutch settlement in the future South Africa. He landed three ships (Dromedaris; Reijger and Goede Hoop) at the future Cape Town on 6 April 1652 and fortified the site as a way station for the VOC trade route between the Netherlands and the East Indies.

Jan van Riebeeck is of cultural and historical significance to South Africa. Many of the Afrikaner population view him as the founding father of their nation. This was prevalent in that his image appeared on stamps and the South African currency from the 1940s up until 1993 when the South African Reserve Bank changed the currency to an apolitical design of the fauna and flora of the region.

6 April used to be known as Van Riebeeck's Day, and later as Founders' Day but the holiday was abolished by the ANC government after the elections of 1994. His image no longer features on any official currency or stamps, but statues of him and his wife remain in Adderley Street, Cape Town. The coat of arms of the city of Cape Town is based on the Van Riebeeck family coat of arms.

Many South African towns and villages have streets named after him. Riebeek-Kasteel is one of the oldest towns in South Africa, situated 75 km from Cape Town in the Riebeek Valley together with its sister town Riebeek West. Hoërskool Jan van Riebeeck is an Afrikaans high school in Cape Town.

All content from Kiddle encyclopedia articles (including the article images and facts) can be freely used under Attribution-ShareAlike license, unless stated otherwise. Cite this article:
Jan van Riebeeck Facts for Kids. Kiddle Encyclopedia.