Kingdom of Kotte facts for kids 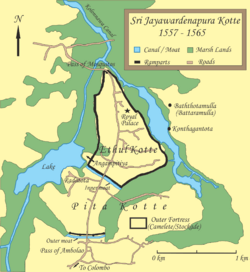 The Kingdom of Kotte (Sinhala: කෝට්ටේ රාජධානිය Kottay Rajadhaniya), centered on Sri Jayawardenepura Kotte , was a kingdom that flourished in Sri Lanka during the 15th century.

Parakramabahu VI first became the king of Raigama in 1412, then in 1415 he made Sri Jayawardenepura Kotte his capital. The King upgraded the existing citadel and built a new royal palace. Parakramabahu VI waited until ties between the Vijayanagara Empire and Jaffna Kingdom were severed. First he captured the Vanni and made its leaders loyal to him. Sapumal Kumaraya was the commander of the Kotte army at the time. Tamil served as one of the court languages of the Kotte kingdom at this time.

All content from Kiddle encyclopedia articles (including the article images and facts) can be freely used under Attribution-ShareAlike license, unless stated otherwise. Cite this article:
Kingdom of Kotte Facts for Kids. Kiddle Encyclopedia.