The Huron Islands are a group of eight small, rocky islands in Lake Superior, located about three miles (4.8 km) off the mouth of the Huron River in northwestern Marquette County, Michigan, United States. Together they comprise the Huron National Wildlife Refuge, which was established by President Theodore Roosevelt in 1905. The refuge is also known as the Huron Islands Wilderness and is a unit of the Seney National Wildlife Refuge. The underwater area around the islands is part of the Huron Islands unit of the Marquette Underwater Preserve and several shipwrecks can be visited by divers. 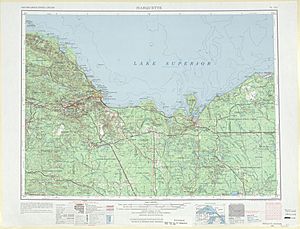 Only one of the islands, known as Lighthouse Island or West Huron Island, is open to the public, and is accessible only by private boat for day use. This island is the site of the historic Huron Island Light, built in 1868. The lighthouse still operates, but is now fully automated.

The larger islands are sparsely forested with pine and birch. The smaller islands are bare granite outcroppings, and home to a large colony of herring gulls. Bald eagles also nest here.

All content from Kiddle encyclopedia articles (including the article images and facts) can be freely used under Attribution-ShareAlike license, unless stated otherwise. Cite this article:
Huron Islands Facts for Kids. Kiddle Encyclopedia.