Traditional Kazakh cuisine focused on mutton and horse meat, as well as various milk products. For hundreds of years, Kazakhs were herders who raised fat-tailed sheep, Bactrian camels, and horses, relying on these animals for transportation, clothing, and food. The cooking techniques and major ingredients have been strongly influenced by the nation's nomadic way of life. For example, most cooking techniques are aimed at long-term preservation of food. There is a large practice of salting and drying meat so that it will last, and there is a preference for sour milk, as it is easier to save in a nomadic lifestyle.

Meat in various forms has always been the primary ingredient of Kazakh cuisine, and traditional Kazakh cooking is based on boiling. Horse and mutton are the most popular forms of meat and are most often served in large uncut pieces which have been boiled. Kazakhs cared especially for horses which they intended to slaughter—keeping them separate from other animals and feeding them so much that they often became so fat they had difficulty moving. 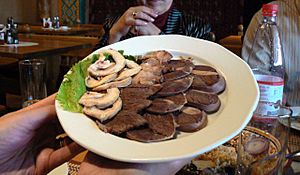 A platter of horse meat served traditionally as an appetizer 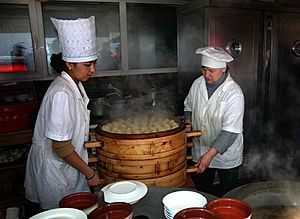 Preparation of a meal in Kazakhstan 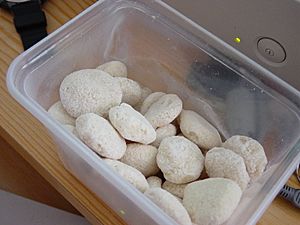 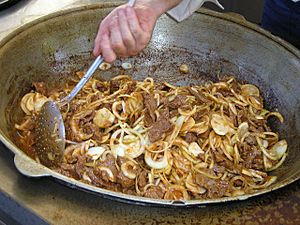 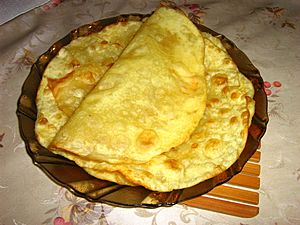 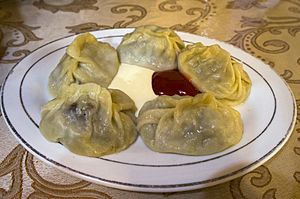 Majority of Kazakh cuisine is tort tulik mal (төрт түлiк мал) – four kinds of cattle (i.e. four kinds of meat): horses, camels, cows, and sheep. Horse meat is the main festive meat, while sheep's meat is used as common meat. Camel meat is also a kind of festive meat, but not the main (as camels in Kazakhstan are not as common as horses). Cow's meat is also a kind of common meat.

Et or Beshbarmak a dish consisting of boiled horse or mutton meat is the most popular Kazakh dish. It is also called "five fingers" because of the way it is eaten. The chunks of boiled meat are cut and served by the host in order of the guests’ importance. Beshbarmak is usually eaten with a boiled pasta sheet, and a meat broth called sorpa, and is traditionally served in Kazakh bowls called kese. Quwyrdaq is another Kazakh's national dish.

Other popular meat dishes are kazy (which is a horse meat sausage that only the wealthy could afford), shuzhuk (horse meat sausages), kuyrdak (also spelled kuirdak, a dish made from roasted horse, sheep, or cow offal, with the heart, liver, kidneys, and other organs, diced and served with onions and peppers), and various horse delicacies, such as zhal (smoked lard from horse's neck) and zhaya (salted and smoked meat from horse's hip and hind leg). Another popular dish is pilaf (palaw), which is made from meat fried with carrots, onions or garlic, then cooked with rice.

, also known as crackler, is melted fat in a large bowl with sugar, eaten by dipping it with bread and is often served with tea. Kylmai is a sausage made during fall and winter slaughtering and is made by stuffing intestines with pieces of ground meat, fat, blood, garlic, salt, and black pepper. Zhauburek, also known as kebab, is popular among hunters and travelers and is a dish in which small pieces of meat are roasted over a fire. Ulpershek is a dish made from the heart, aorta, and fat of a horse, prepared in a kettle, and is often shared between sisters-in-law as a sign of unity. Kazy is a sausage eaten in the spring when a cow has a new calf; it is a giant sausage sometimes served with rice or kurt. Mypalau is a dish made from sheep's brain, made by putting the brain in a wooden bowl, adding marrow, pieces of meat, salted fat in broth, and garlic, and this dish is then often served to honored guests. Akshelek is a large camel bone distributed to children after slaughtering and cooking meat from a camel.

Kylmai is another kind of sausage eaten later in the year after it has aged—if smoked it will last a long time, something important in Kazakh cooking. Zhal is the layer of fat under a horse's mane and is served only to special and honored guests, as it is such a rare commodity. Zhaya is the rump of a horse, probably served boiled. Ak Sorpa is a white broth made in the fall, and is a special meal for rich men. Kuiryk-bauyr is a meal which used to be served to kinsmen at wedding parties. It is made from boiled meat, sliced thinly, then sour milk and salted broth are added.

Sur et is salted horsemeat that smoked over elm, juniper or meadowsweet.

Traditional milk products include sut, which is boiled milk. Kaimak is sour cream made from boiled milk, and is sometimes served with tea. Sary mai is butter made from old milk, often in a leather bag. Kurt is prepared by pressing thick sour cream, and is dried until white and salty. Irimzhik is a cottage cheese processed in the spring, made from boiled, unskimmed milk and added sour cream. Suzbe and katyk are strained and thickened sour milk. Koryktyk is a herdsman's food, which is thickened milk made out on the steppe. Tosap is made from the scum on the sides of a metal pot and is used as medicine. Airan is sour milk used in winter and summer. Shalgam, which is radish salad, and finally, shubat and kumys (fermented camel’s milk and fermented mare’s milk) are seen as good for one’s health and are imbibed often.

The introduction of flour to Kazakh cuisine brought about dishes such as baursak, shelpek, manti, and nan. Baursak is made by frying dough balls, and shelpek is a flat cake made in a similar fashion. Manti, a very popular Kazakh dish, is a spiced mixture of ground lamb (or beef) spiced with black pepper, enclosed in a dough wrapper. Manti are cooked in a multi-level steamer and served topped with butter, sour cream, or onion sauce. Nan is a type of traditional bread made in the tandoor oven, popular in cities along the Silk Way. Kuimak, kattama, and oima are flat puff cakes fried in oil then covered in cream. Another sweet is shek-shek.

The traditional drinks are fermented mare's milk (kumys), camel's milk (shubat), cow's milk (airan), and sheep's milk, as well as their products kaymak (sour cream), katyk or ayran (buttermilk), kurt (which is made from dried cheese and whey rolled into balls), and irimshik (dried sour milk product similar to kurt, but not rolled into balls). These drinks were traditionally consumed with the main course. However, meals often end with kumys and then tea. In the summer, chal is one of the staple drinks of the Adai Kazakhs. Black tea was introduced from China after the foundation of the Silk Way and was traditionally consumed with sweets after the main course. Nowadays it has virtually replaced other traditional drinks and every meal is accompanied with tea. The tea ceremony, taking its roots from the nomads many centuries ago, is a special dastarkhan ritual in Kazakhstan. Kazakh tea is typically strong black tea with milk or cream. Consumption of tea in Kazakhstan is one of the highest in the world - 1.2 kilograms a year per person. In comparison, tea consumption in India is 650 grams per person.

The most common traditional sweets are baursak, shelpek, shek-shek (also known by the Tatar name chack-chack), and zhent. They are easy to prepare in nomadic conditions - in a cauldron, and today are traditionally prepared for any celebration undoubtedly being an additional decoration of the festive table.

In addition to traditional nomadic practices and the internal development of Kazakh food and cuisine, other countries and ethnic groups have had a large influence on the food and food culture of Kazakhstan. These ethnic groups included Russians, Tatars, Ukrainians, Uzbeks, Germans, Uyghurs, Koreans, and many more. Although traditional Kazakh cuisine is based on meat and milk products, more recently, vegetables, fish and seafood, baked dishes, and sweets have been added to Kazakh cuisine.

In nomadic cookery, the amount of equipment is minimal because it must be transported from location to location to follow the grazing herds. In addition, there are no luxuries such as electricity or running water. The iron kazan is the most indispensable piece of cookware—it is used for cooking pilaf, soups, and even bread—if the kazan is shallow, it can be turned over to cook flatbread on the back. Many parts of the sheep and goat are used for holding milk products or for making cheese.

The host of the meal cuts the meat himself (or herself) and gives the best cuts to more honored people or to children. This meat is most often eaten with thin boiled pieces of pastry. Sometimes the most honored guest at a meal will receive a cooked head of a ram, which is passed around in ceremonial or ritual practice. A guest is always given the place of honor and a special welcome in Kazakh practice.

Kazakhs traditionally eat at a low table called a Dastarkhān. Kazakhs also maintain a tradition of using beautiful dishware when possible. Kumys is served in wide bowls decorated with silver or in painted cups, and meat is often served on wide platters. Tea is steeped in ornate teapots and served in lovely cups. Unusual ingredients such as dried melon and small intestines were regularly woven into interesting patterns, and the bread boasted floral designs painted with berry juice. Bigger and deeper bowls are used to serve dairy products, and small wooden basins are used for making dough. Further more, each family has their own wooden spoons, which are cared for and transported in felt and wooden cases, showing their importance in food culture in Kazakhstan.

Kazakhs like other Central Asian nations have some special rules of "tea ceremony". Traditionally it is not allowed to pour tea to the brim of the cup called piala. The less tea is poured the more respect is given to the guest. It is explained by saying that if the host pours too much tea, it looks like he wants the guest to leave sooner. The less tea is poured, the more the host has to pour it over and over again, so that the guest always has hot tea, which shows care for the guest. However, different regions may have different understandings of the amount of "tea with respect".

All content from Kiddle encyclopedia articles (including the article images and facts) can be freely used under Attribution-ShareAlike license, unless stated otherwise. Cite this article:
Kazakh cuisine Facts for Kids. Kiddle Encyclopedia.