The argali or mountain sheep (Ovis ammon) is a wild sheep. It lives in the highlands of Central Asia (Himalaya, Tibet, Altay).

It is the biggest wild sheep. It stands as high as 120 cm. It weights as much as 140 kg. The Pamir argali (also called Marco Polo sheep, for they were first described by that traveller) may be more than 6 feet in length. It is globally endangered. 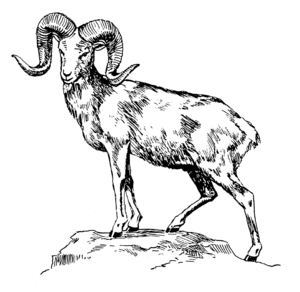 It is the largest species of wild sheep. The North American bighorn sheep may approach comparable weights but is normally considerably outsized by the argali. Argali stand 85 to 135 cm (3 to 4 ft) high at the shoulder and measure 136 to 200 cm (4 to 7 ft) long from the head to the base of the tail. The female, or ewe is the smaller sex by a considerable margin, sometimes weighing less than half as much as the male, or ram. The ewes can weigh from 43.2 to 100 kg (95 to 220 lb) and the rams typically from 97 to 328 kg (214 to 723 lb), with a maximum reported mass of 356 kg (785 lb). The Pamir argali (also called Marco Polo sheep, for they were first described by that traveler), O. a. polii, is the largest race on average, regularly measuring more than 180 cm (5.9 ft) long without the tail, and is less sexually dimorphic in body mass than most other subspecies. The argali has relatively the shortest tail of any wild goat-antelope or sheep, with reported tail lengths of 9.5–17 cm (3.7–6.7 in).

The general coloration varies between each animal, from a light yellow to a reddish-brown to a dark grey-brown. Argali or nyan from the Himalayas are usually relatively dark, whereas those from Russian ranges are often relatively pale. In summertime, the coat is often lightly spotted with a salt-and-pepper pattern. The back is darker than the sides, which gradually lighten in color. The face, tail and the buttocks are yellowish-white. The male has a whitish neck ruff and a dorsal crest and is usually slightly darker in color than the female. Males have two large corkscrew shaped horns, some measuring 190 cm (6.2 ft) in total length and weighing up to 23 kg (51 lb). Males use their horns for competing with one another. Females also carry horns, but they are much smaller, usually measuring less than 50 cm (20 in) in total length.

Argali range from central Kazakhstan in the west to the Shanxi Province in China in the east and from the Altai Mountains in the north to the Himalayas to the south. They are a species of mountainous areas, living from elevations of 300 to 5,800 m (980 to 19,030 ft). In protected areas, the species generally prefers gently sloping areas with soft broken terrain, although ewes with lambs often take up residence in more precipitous areas, characterized by canyons and jagged rocks. In areas where they are extensively hunted (such as Kazakhstan), they are more likely to be found in forested areas. In parts of China and Russia where they compete for resources with numerous domestic stock, argali more regularly take up residence in precipitous, jagged areas. Argali may search for regions in the mountains where snow cover is not heavy during the winter, following winds that blow snow off the earth. Rams are generally found at higher elevations more regularly than females and stay at higher elevations longer during the winter.

Adult argali eat 16–19 kg (35–42 lb) of food a day. The vegetation preferred by the species varies based on elevation and area. In higher elevations, they predominantly eat grasses, sedges, and forbs. At midelevation habitats, they more regularly feed on bushes and mesophyte grasses. In the lowest ranges and the spurs of deserts, grasses and sedges again predominate, but often of different species than the high-elevation ones. In north-central Kazakhstan, sprouts, leaves, flowers, and fruits are significant to the diet all year, whereas they appear to be a rare dietary supplement over the rest of the range. Water is needed by argali, which is rarely a problem for animals living at high elevation, where melting snow and small waterways are regularly encountered. In drier climes, argali may travel several kilometers in search of water. When available, argali readily consume saline soil.

All content from Kiddle encyclopedia articles (including the article images and facts) can be freely used under Attribution-ShareAlike license, unless stated otherwise. Cite this article:
Argali Facts for Kids. Kiddle Encyclopedia.