Ovis is a genus of the subfamily Caprinae, of the family Bovidae. The wild sheep and domestic sheep and other animals like it belong to this genus. There are 5 or more animals in this genus. 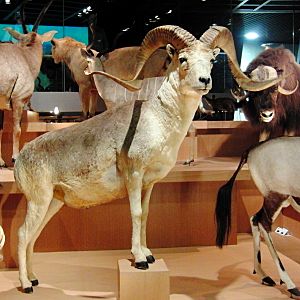 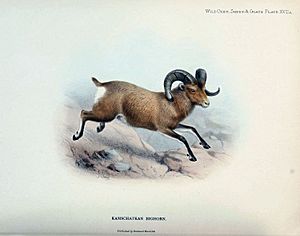 Sheep are fairly small compared to other ungulates; in most species, adults weigh less than 100 kg (220 lb). Males are usually heavier than females by a significant amount. Wild sheep are mostly found in hilly or mountainous habitats. Their diets consist mainly of grasses, as well as other plants and lichens. Like other ruminants, they have four-chambered stomachs, which play a vital role in digesting food; they eructate, and rechew the cud to enable them to digest and live on low-quality, rough plant materials. Sheep conserve water well and can live in fairly dry environments.

The bodies of wild sheep (and some domestic breeds) are covered by a coat of thick hair to protect them from cold. This coat contains long, stiff hairs, called kemps, over a short, woolly undercoat, which grows in autumn and is shed in spring. This woolly undercoat has been developed in many domestic sheep breeds into a fleece of long wool, with selection against kemp hairs in these breeds. The fleece covers the body (in a few breeds also the face and legs) and is used for fibre. Domestic sheep are also kept for their milk and meat (which is called mutton or lamb).

In wild sheep, both rams and ewes have horns, while in domestic sheep (depending upon breed) horns may be present in both rams and ewes, in rams only, or in neither. Rams' horns may be very large – those of a mature bighorn ram can weigh 14 kg (31 lb) – as much as the bones of the rest of its body put together. Rams use their horns to fight with each other for dominance and the right to mate with females. In most cases, they do not injure each other because they hit each other head to head and their curved horns do not strike each other's bodies. They are also protected by having very thick skin and double-layered skulls.

Wild sheep have very keen senses of sight and hearing. When detecting predators, wild sheep most often flee, usually uphill to higher ground. However, they can also fight back. The Dall sheep has been known to butt wolves off the face of cliffs.

Sheep have scent glands on their faces and feet. Communication through the scent glands is not well understood, but is thought to be important for sexual signaling. Males can smell females that are fertile and ready to mate, and rams mark their territories by rubbing scent on rocks.

These are the main species of ovis.

All content from Kiddle encyclopedia articles (including the article images and facts) can be freely used under Attribution-ShareAlike license, unless stated otherwise. Cite this article:
Ovis Facts for Kids. Kiddle Encyclopedia.