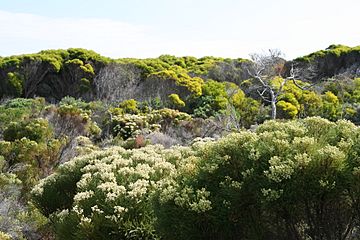 Fynbos in the Western Cape 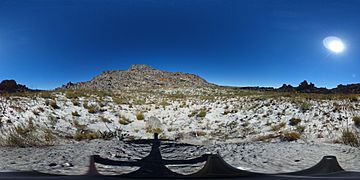 A 360 degree photograph of fynbos in the Groot Winterhoek region of the Western Cape about 18 months after a fire. New plants can be seen in various stages of growth following the fire. The infertile white soil that fynbos tends to grow in can also be clearly seen. Click here to see the photograph in 360 degrees.

The Cape Floristic Region, the smallest of the six recognised floral kingdoms of the world, is an area of extraordinarily high diversity and endemism, and is home to over 9,000 vascular plant species, of which 69 percent are endemic. Much of this diversity is associated with the fynbos biome, a Mediterranean-type, fire-prone shrubland. The economical worth of fynbos biodiversity, based on harvests of fynbos products (e.g. wildflowers) and eco-tourism, is estimated to be in the region of R77 million a year. Thus, it is clear that the Cape Floristic Region has both economic and intrinsic biological value as a biodiversity hotspot.

Home to the greatest non-tropical concentration of higher plant species in the world, the region is the only hotspot that encompasses an entire floral kingdom, and holds five of South Africa’s 12 endemic plant families and 160 endemic genera. Covering 78,555 km², Cape Floristic Region hotspot is located entirely within the borders of South Africa. It is one of the five temperate Mediterranean-type systems on the hotspots list, and is one of only two hotspots that encompass an entire floral kingdom (the other being New Caledonia). The Region covers the Mediterranean climate region of South Africa in the Western Cape in the southwestern corner of the country, and extends eastward into the Eastern Cape, a transitional zone between the winter rainfall region to the west and the summer-rainfall region to the east in KwaZulu-Natal.

Most of the region is covered with fynbos, a sclerophyllous shrubland occurring on acid sands or nutrient-poor soils derived from Table Mountain sandstones (Cape Supergroup). Fynbos is home to a diverse plethora of plant species including many members of the protea family (Proteaceae), heath family (Ericaceae), and reed family of restios (Restionaceae). Other vegetation types are sandveld, a soft coastal scrubland found mostly on the west-facing coast of the Western Cape Province, on tertiary sands. Renosterveld is a grassy shrubland dominated by members of the daisy family (Asteraceae, particularly renosterbos (Elytropappus rhinocerotis), graminoids and geophytes, occurring on the base-rich shaley soils of the coastal forelands. Small pockets of Afromontane forest (Southern Afrotemperate Forest) can be found in humid and sheltered areas.

The fynbos ecoregions are designated one of the Global 200 priority ecoregions for conservation. Conservation International declared the Cape floristic region to be a biodiversity hotspot.

It is thought that the Cape Floristic Region is experiencing one of the most rapid rates of extinction in the world due to habitat loss, land degradation, and invasive alien plants. 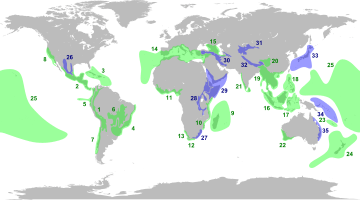 All content from Kiddle encyclopedia articles (including the article images and facts) can be freely used under Attribution-ShareAlike license, unless stated otherwise. Cite this article:
Cape Floristic Region Facts for Kids. Kiddle Encyclopedia.