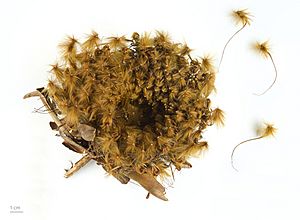 The Protea (giant Protea known as Protea cynaroides) is part of an ancient plant family, the Proteaceae, which had already divided into two subfamilies before the break-up of the Gondwanaland continent about 140 million years ago. Both subfamilies, the Proteoideae and the Grevilleoideae, occur mainly in the southern hemisphere. In southern Africa there are about 360 species, mainly from the subfamily Proteoideae, of which more than 330 species are confined to the Cape Foral Kingdom, between Nieuwoudtville in the northwest and Grahamstown in the east. Protea cynaroides belongs to the genus Protea, which has more than 92 species, subspecies and varieties. Other well-known genera of the Proteaceae are the Leucospermum with the brightly coloured "pincushion" flowers, Leucadendron with yellow or red-brown foliage and Serruria, of which the Serruria Florida or "Blushing Bride" with its pale pink flowers is widely used in bridal bouquets. Plants in the subfamily Grevilleoideae occur mainly in Australia. The Protea (Protea cynaroides) is the national flower of South Africa.

The variety in plant size, habit, flower size and colour of the genus Protea was the reason it was named after the Greek god Proteus, who could change his shape at will. The flower bud of Protea cynaroides looks remarkably like the globe artichoke vegetable with the Latin name of Cynara scolymus and this led the botanist Linnaeus to give it the species name cynaroides.

The protea can grow only after a fire. As a simple explanation, it is because the head of this national flower has seeds inside, which can stay tightly sealed in a hard shell for almost 20 years. The shell does not open until it becomes scorched and the fire is all over. The light, fluffy seeds are then blown to the ground by the wind, where they all begin to grow again.

All content from Kiddle encyclopedia articles (including the article images and facts) can be freely used under Attribution-ShareAlike license, unless stated otherwise. Cite this article:
Protea Facts for Kids. Kiddle Encyclopedia.