Juan Sebastián Elcano (1476 – 4 August 1526) was a Spanish explorer of Basque origin. He completed the first circumnavigation of the world started by Ferdinand Magellan. After Magellan's death in the Philippines, Elcano took command of the expedition and completed the voyage to Spain. The voyage proved that the Earth was round. When he returned to Spain the king gave Elcano his own Coat of arms. He also received a pension of 500 ducats.

Elcano was born in 1476 in Getaria, Gipuzkoa in the Basque Country of northern Spain. His parents were Domingo Sebastián de el Cano and Catalina de el Puerto. From his childhood he was a sailor and fisherman. He later smuggled contraband into French ports. He was part of an expedition against Algeria in 1509. In 1519 he was in Seville when Charles V of Spain was sending a major expedition to find a shortcut to the Indies. 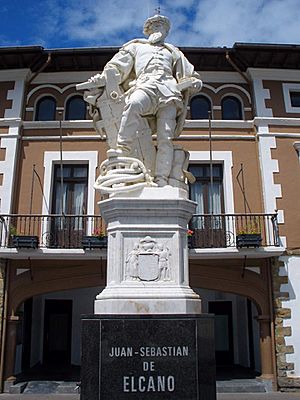 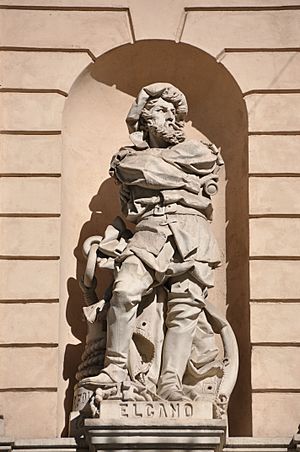 Charles V had selected the Portuguese navigator Ferdinand Magellan to lead an expedition made up of five ships and 239 men. Their mission was to find a shortcut to the Far East by going around the tip of South America. Elcano was selected as Magellan's second-in-command.

When the expedition wintered on the coast of Brazil the crews joined in a mutiny because they did not want to go any further. By this time Magellan and Elcano no longer trusted each other. Magellan blamed Elcano for the mutiny and placed him in chains. One of Magellan's ships was wrecked in Brazil. By the time they reached the passage between the Atlantic Ocean and the Pacific Ocean, afterwards named the Strait of Magellan, one more ship had turned back. Magellan started through the strait in October 1520 taking a month to get through.

The three ships reached Guam in March 1521. Later in the month they reached Homonhon Island in the Philippines. By this time they had only 150 men. Magellan formed a friendship with the island's king and soon joined in a war between the king and a rival. On April 27, 1521 Magellan was killed in a battle. The remaining men and ships quickly escaped the Philippines arrived at the Spice Islands in November 1521.

By this time Elcano commanded the last ship in the expedition. They left the Spice Islands in December. On September 8, 1522 Elcano and his crew reached Spain completing Magellan's expedition. Elcano was surprised to learn they had lost a day in circumnavigating the globe.

He spent about three years at Valladolid, where he fell in love with María Vidaurreta. Together they had a daughter. 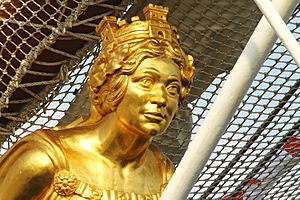 The figurehead on board the ship Juan Sebastián Elcano

The Sailing ship Juan Sebastián de Elcano is named for the explorer. It is a four-masted, topsail schooner, one of the largest in the world. It had sailed around the earth six times by 1986. The ship has participated in three Operation Sail events in New York harbor. It has probably been sailed more than any other major tall ship. Her home port is Cadiz, Spain. The ship is owned by the Spanish Navy.

All content from Kiddle encyclopedia articles (including the article images and facts) can be freely used under Attribution-ShareAlike license, unless stated otherwise. Cite this article:
Juan Sebastián Elcano Facts for Kids. Kiddle Encyclopedia.