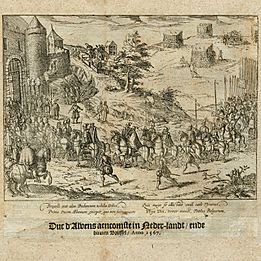 The arrival of the Duke of Alba in Brussels, 1567. Print from 'The Wars of Nassau' by Willem Baudartius, Amsterdam 1616

Fernando Álvarez de Toledo y Pimentel, 3rd Duke of Alba (29 October 1507 – 11 December 1582), known as the Grand Duke of Alba (Spanish: Gran Duque de Alba, Portuguese: Grão Duque de Alba) in Spain and Portugal and as the Iron Duke (Dutch: IJzeren Hertog) in the Netherlands, was a Spanish noble, general and diplomat. He was titled the 3rd Duke of Alba de Tormes, 4th Marquess of Coria, 3rd Count of Salvatierra de Tormes, 2nd Count of Piedrahita, 8th Lord of Valdecorneja, Grandee of Spain and a Knight of the Order of the Golden Fleece. His motto in Latin was Deo patrum Nostrorum ("To the God of our fathers").

He was an adviser of King Charles I of Spain (Charles V, Holy Roman Emperor), and his successor, Philip II of Spain, Mayordomo mayor of both, member of their Councils of State and War, governor of the Duchy of Milan (1555–1556), viceroy of the Kingdom of Naples (1556–1558), governor of the Netherlands (1567–1573) and viceroy and constable of the Kingdom of Portugal (1580–1582). He represented Philip II in negotiating Philip's betrothal to Elisabeth of Valois and Anna of Austria, who were the third and fourth (and last) wives of the king.

By some historians, he is considered the most effective general of his generation as well as one of the greatest in military history. Although a tough leader, he was respected by his troops. He touched their sentiments, such as by addressing them in his speeches as "gentlemen soldiers" (señores soldados), but he was also popular among them for daring statements such as the following:

Kings use men like oranges, first they squeeze the juice and then throw away the peel.

Alba first distinguished himself in the conquest of Tunis (1535) during the Ottoman-Habsburg Wars when Charles defeated Hayreddin Barbarossa as part of a long conflict for predominance over the western Mediterranean Sea. He then commanded the Spanish troops at the Battle of Mühlberg (1547), where the army of Emperor Charles defeated the German Protestant princes.

On December 26, 1566, he received the Golden Rose, the blessed sword and hat granted by Pope Pius V, through the papal brief Solent Romani Pontifices, in recognition of his singular efforts in favor of Catholicism and for being considered one of his champions.

He is best known for his actions against the revolt of the Netherlands, where he instituted the Council of Troubles and repeatedly defeated the troops of William of Orange and Louis of Nassau during the first stages of the Eighty Years' War. He is also known for the brutalities during the capture of Mechelen, Zutphen, Naarden and Haarlem. In spite of the military successes, the Dutch revolt was not broken, and Alba was recalled to Spain. His last military successes were in the Portuguese succession crisis of 1580, winning the Battle of Alcantara and conquering that kingdom for Philip II. Spain unified all the kingdoms of the Iberian Peninsula and consequently expanded its overseas territories.

All content from Kiddle encyclopedia articles (including the article images and facts) can be freely used under Attribution-ShareAlike license, unless stated otherwise. Cite this article:
Fernando Álvarez de Toledo, 3rd Duke of Alba Facts for Kids. Kiddle Encyclopedia.